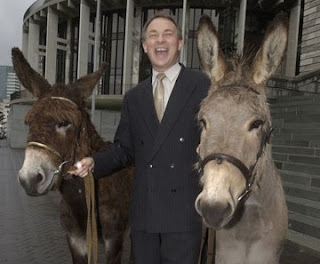 The Labour Party is irrelevant to the development of progressive politics in New Zealand. Real change will come from people who insist on thinking for themselves and who reject the party-mindedness of Parliament.


It won't come as a surprise that I think the Labour Party is useless. And the people who continue to support this politically bankrupt party are equally as useless. I can say things like this because I don't have a political career and a big fat salary to protect. Trevor Mallard can't publicly claim that I am 'a waste of money'. I also know I can say anything I like and they will be no response from Labourites. There is, unfortunately, a lack of intellectual vigour in New Zealand politics and those who don't play by the established rules are deliberately shunned. Notice the lack of socialist ideas discussed in the media and in the blogosphere?

The Labour Party rightly talks about the shattered state of the New Zealand economy but that's about as far as it goes. Labour continues to advocate the same kind of neoliberal policies that contributed to creating the problems in the first place.

Labour's solution is to tinker with them. The capitalist engine might be completely stuffed but Labour's finance spokesperson thinks he can get it going again with some fiddling, some no 8 wire and some empty rhetoric.

According to David Cunliffe: 'Labour will be hands-on, working alongside business to front the tough issues that must be faced.'

Yes, Labour will be 'hands on' - hands around the neck of the working class, strangling the life out of it in the name of 'economic recovery'.

While 'working alongside business' , Labour would be imposing austerity measures on the rest of us. Cunliffe has previously described this as Labour 'not shirking its responsibilities'.

While Cunliffe, albeit in evasive code, talks like an attack dog for the rich and powerful, Labourites on Labour aligned blogs like The Standard, bleat on about such things as National's welfare cuts, the growing poverty levels and attacks on working conditions. But they won't leave the safety of the 'mainstream' to fight them.

All they seem capable of doing these days is to write anti-John Key rants. But they remain silent on Labour's continued commitment to the 'free market'. It's empty rhetoric and moral posturing.

Unlike some commentators I'm not angry or even disappointed with Phil Goff, I never expected anything from him in the first place and I haven't been wrong.

I haven't voted Labour since 1984. Since then all Labour has done is to ensure the continued rule of the wealthy and privileged.

A Labour supporter of my acquaintance (they do still exist) recently told me that Labour may have its 'flaws' (his words) but a Labour government would be at least be better than having another three years of John key. Yes, the 'lesser evil' argument is brought out of the closet for another good airing.

One of the many problems with this tired argument is that Labour just further degenerates as time rolls by. There doesn't seem to be a line that cannot be crossed, no fortress that cannot be surrendered.

I have read much about the dangers of a second term National Government but I say that the clear and present danger is that the working class in New Zealand has been weakened by a useless Labour Party and its equally useless allies in the union bureaucracy. They are not part of the solution - they are part of the problem.

I say that anyone who claims to be an ally of the working class should have walked out on the Labour Party years ago. Those who still remain are irrelevant to the development of progressive politics in this country. They are lackeys of the status quo.

There will be a lot of propaganda over the coming months about the importance of voting and 'having on our say'. Nonsense. Big business has already won the election.

The only real change in our time will come from people who insist on thinking for themselves and who reject the party-mindedness of Parliament.
Posted by Steven Cowan on Wednesday, September 28, 2011