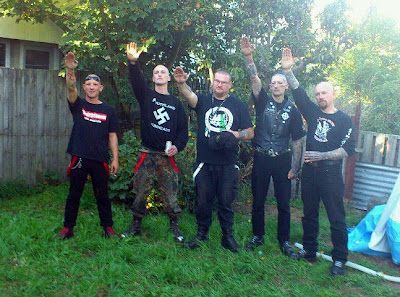 Watching some of the court trial of Norwegian neo-fascist killer Anders Breivik, I was reminded that New Zealand harbours its own motley collection of neo-fascist creeps.

This photo is from a recent neo fascist 'White Pride Street March' after-party.

The man in the centre is Kyle Chapman of Right Wing Resistance and the most prominent defender of neo-fascism in New Zealand. He is doing the fascist salute with leaders of various violent neo-Nazi groups: Blood and Honour, Kaos Skins, National Front and South Island Skinheads.
Posted by Steven Cowan on Wednesday, April 18, 2012