Barry Manilow fan Paul Lonsdale wants to be Mayor of Christchurch. Or is his  real priority a seat on the Council?

Christchurch mayoral candidate Lianne Dalziel has said that she wants a contest in the upcoming mayoral race and she has got a response from the Central City Business Association manager Paul Lonsdale. He has thrown his hat into the ring. 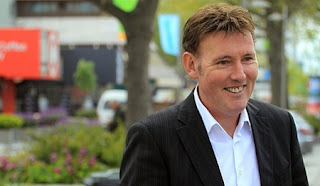 Paul Lonsdale will be an unfamiliar name to many, especially outside  of Christchurch, but  he did have a  brief period of international recognition some years ago.

Lonsdale thought it would be a great idea to use the music of Barry Manilow to shift untidy working class  teenagers out of the Cashel Street Mall. The story went global with Lonsdale denying that he had ever described Baz's  music as a 'weapon of mass destruction'.

In the face of international amusement, Lonsdale quickly dropped the idea of pumping 'Mandy' and 'I Write The Songs' throughout the mall.

Lonsdale supported  the police view that  the Hack Circle was 'a breeding ground for crime'. After smearing the reputations of youth who used the area, the police later backpedaled on that claim and admitted that only a handful of kids ever caused any trouble.

While Lonsdale loudly raised his concerns about the so-called  unruly behaviour of teenagers in the mall, he showed next to no concern about the alcohol-fuelled mayhem that erupted out of the Oxford Strip of bars every Friday and Saturday night.

But then its easier to criticise powerless working class youth and rather more 'problematic' to criticise an area of the city owned by the influential Antony Gough (uncle to Councillor Jamie Gough).

Not uncoincidentally Antony Gough had pushed for stronger police presence in the Cashel Mall area claiming that the people who hung out in the hack circle were 'just scary'.

Yes, the youth  might of looked and acted different - but 'scary'? The class prejudice  of the Christchurch establishment was on display for all to see.


Gloria Sharplin, a spokesperson for a protest the occurred at the mall in August 2007 , told The Press newspaper "Young people are being made to feel unwelcome. The hack circle and the fountain are not great places, but it is all you have when you have no money. They can't shut us up and just drive us out of the city'


And Councillor Yani Johanson said:  I think there has been lots of negative stereotyping of young people in regards to City Mall and sadly there is a feeling amongst some that Council is kicking them out in favour of retail business. The reality is that this is a public space and that young people should have as much right to enjoy it as anyone else.'

And, just like Sideshow Bob, Lonsdale has displayed little interest in the plight of the eastern suburbs. But he has had a lot to say about the proposed sports stadium / white elephant. He says it is very important  that it is completed before the 2017 British Lions rugby tour.

The chances of Lonsdale beating Dalziel are slim which Lonsdale clearly recognises himself. He is also having another bite at the cherry by standing for council as well. Indeed his bid for mayoralty may well be just an attempt to raise his profile in order to get him on to the Council.
Posted by Steven Cowan on Monday, August 12, 2013