I DON'T WANT TO TALK ABOUT IT

Labour leader David Cunliffe declares that 'socialism is not a word I use'. 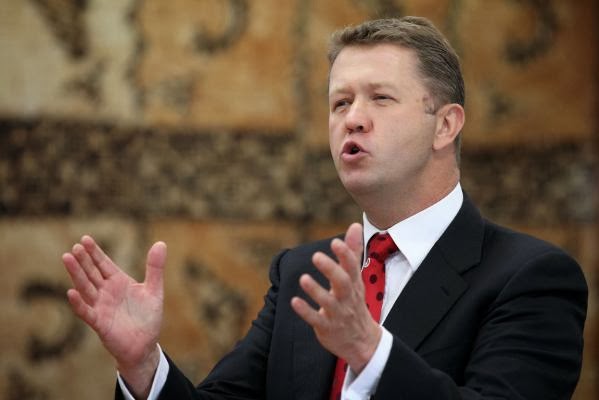 After all the vaguely left wing rhetoric of his leadership campaign, David Cunliffe has now reverted to type. If anyone really thought David Cunliffe was going to reject neoliberal politics for a new progressive alternative, that illusion should of been shattered by the interview with him and David Parker on Q+A  last Sunday.

After referring to 'socialism' during his leadership campaign he told interviewer Michael Parkin:

'Socialism's not a word that I use. I say social democracy because I don't think the government needs to own all the means of production. That's not our intention. But we will be there for ordinary New Zealanders, and we will make a change for the better in their lives. That we guarantee.'

I shuddered.The Labour Party has, for the past three decades, monotonously declared its commitment to social democracy. The problem is that, while it has been proclaiming its social democratic intentions, it has enthusiastically pursued a neoliberal agenda.

Cunliffe's rhetoric that Labour 'will be there for ordinary New Zealanders' is the kind of empty rhetoric we've heard from Labour year after year after year. Yes, Labour has 'been there for ordinary New Zealanders' as it has sold off assets, introduced draconian legislation against welfare beneficiaries, sat on its hands and allowed power prices to skyrocket etc. The list of Labour's neoliberal sins is a very long one indeed.

Cunliffe has hardly inspired confidence that he will be different by appointing market technocrat David Parker as deputy leader and finance spokesperson.

Last year David Parker offered a glimpse into his economic philosophy and agenda at a meeting of business suits. At one point, he declared:

'Labour is a progressive party: fundamentally it is the party of change, the party that is willing to make structural changes when necessary ..... It’s always up to Labour to make the case for why change is needed, and why the status quo isn't working. So the difference between [Labour and National] is not that the Government is pro-business, and we are anti. Nor are we talking about ‘tax and spend’, or ‘cutting the pie differently’. Those are tired clichés. What we are talking about is the need to modernise because we can’t keep going as we are. We need to take some hard decisions and shatter some orthodoxies that are past their use-by date.'

Drilling on down by what he actually meant by the above Parker stated:

'What I’ve laid out for you is a comprehensive sweep of modernising reforms across superannuation, pro-growth tax reform, help for innovation and exporting, and modernising our savings and investment policy.'

Call me old fashioned but none of this, as Cunliffe might want us to believe, suggests that Labour has rediscovered its social democratic heart. It sounds more like a mere tweaking with the neoliberal settings to me.

This is what Cunliffe is really selling.

He might talk platitudes about creating a 'fairer and inclusive society' but unless he explicitly states that Labour will bring an end to the neoliberal consensus then we can only conclude that, under a Cunliffe-Parker government, it will indeed be business as usual.

You, dear reader, should accept none of this. We can start by reminding David Cunliffe that socialism is not a dirty word. If it frightens the rich and powerful then - who cares?

And we can start by rejecting the dismal argument of Labour's apparatchik's and the union top brass that a Labour-Green-Mana government will be somehow 'progressive'.

If socialists really were running the show in New Zealand , they would be building a society run by, and in the interests of, working people. Labour's philosophy and agenda isn't even remotely close to this.

If Labour's leader doesn't want to talk about socialism, if he wants to keep it off the political agenda, then it us to the rest of us to talk about it.