A LOAD OF HOT AIR 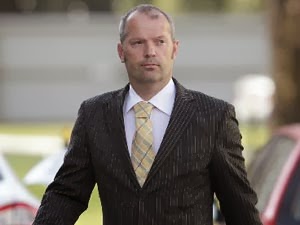 Christchurch councillors Aaron Keown and Ngaire Button have suddenly discovered that there is housing crisis in Christchurch.


When he isn't putting up illegal billboards, Christchurch councillor Aaron Keown is making erroneous claims about being a champion of the people.

He and his fellow City First councillor, Ngaire Button, say that 'housing is one of the most serious issues we face in our communities'.

But the issue can't be that serious for our dynamic duo as they have had nothing to say about the housing crisis, particularly in the eastern suburbs, for the past three years. And neither candidate have spoken out against the skyrocketing rents in the Eastside which has reduced many people to a state of near poverty.

Keown has been more  concerned about the working girls on Mancheser Street. And the health of cricketer Jesse Ryder.


As loyal Mayor Sideshow Bob groupies they have comprehensively failed to represent and defend the interest of the very people who voted for them last time round.


In their election propaganda Keown and Button go on to say that 'both the limited availability of good quality rental homes but also the cost of rents are serious issues.'

But in April last year both these 'concerned' councillors voted against a Christchurch City Council decision not to raise rents for council tenants in 2012. They were the only two councillors to vote against the decision.

In 2008 Ngaire Button voted to increase council rents by a massive 24 percent. The Council of Social Services appealed against the decision and the High Court subsequently ruled out the increase as illegal.
Posted by Steven Cowan on Friday, September 27, 2013