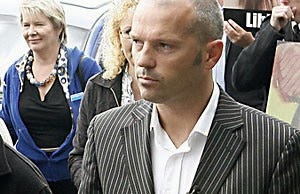 Former Christchurch City councillor Aaron Keown has  urged readers of his Facebook page  to send abusive phone messages to a woman he is annoyed with.  This is the same Aaron Keown  who Canterbury cricket chief Lee Germon has described as 'honest, fair and trustworthy'. Meanwhile it has been revealed that the cellphone number that Keown posted allegedly belongs to another  former Christchurch city councillor, Gordon Freeman.

One of the highlights of the recent local body elections in Christchurch  was that Aaron Keown was voted off the council. Unfortunately he still managed to scrape  back on to the Shirley- Community Board  and the Canterbury District Health Board.


Keown claimed that he lost his council seat because there was a campaign against him, which included the defacing of his billboards. Keown, one of Mayor Sideshow Bob's  little toadies, seemed unable to comprehend that he was booted off council  because, well, he's just not popular with the good people of Christchurch.

And Keown has screwed up again.

This time he  is in the poo  because he has posted  on his Facebook page  the cellphone  number of a woman who he claims left an  abusive message on his phone.


Deputy Mayor Vicki  Buck  says the post  'is not ok for anyone. It's not in the slightest  bit helpful, especially for an elected member'.


But, at the time  of writing, the offending  post still there on Keown's Facebook page with, incredibly 74  'likes'.  You can only shudder at the thought that there are another 74 people in Christchurch who think like Keown.

The post reads:  'Had another crank message today from some nut job but this time they didn't have a blocked number. She didn't leave her name just a rude message about the election. So if you are bored feel free to send her abusive messages or do a crank call, its obviously what she's into. Her number is ....... Don't hold back, she doesn't'.

The issue has become a whole lot murkier with the cellphone number that Keown has  posted  allegedly belonging to another  former Christchurch city councillor  Gordon Freeman.

He and his wife Martha are the owners of the Redwood Hotel in Christchurch which includes the Sequoia 88 restaurant. He can often be heard  on local radio advertising the restaurant.

He is also a former Christchurch mayoral candidate.
Posted by Steven Cowan on Thursday, November 14, 2013