PRIVATISING THE PROFIT, SOCIALISING THE LOSSES 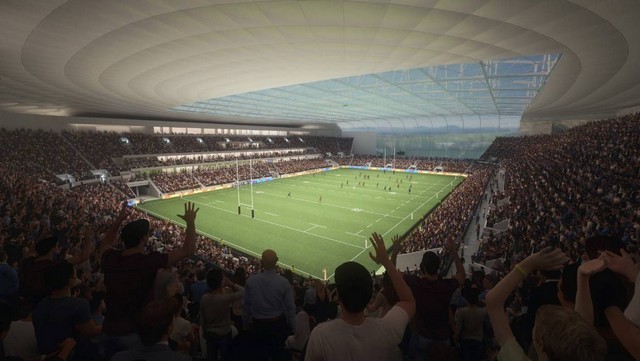 The Christchurch City Council has voted to spend over $250 million on a sports stadium that will cost over $4 million a year to maintain and will never make any money. The council's own figures say the stadium is likely to lose over $70 million over the next thirty years.

IN AUGUST last year Christchurch mayoral candidate John Minto was condemning the decision of the Christchurch City Council not to re-open two social housing complexes, comprising a total of 52 units. He told The Press that it was yet another expression of 'callous indifference' by the council toward the housing needs of people on low incomes. He pointed out that such was the council's apparent lack of concern, the city was still at least 400 flats short of the number it owned before the earthquakes.

Minto said that in a time of such obvious social need, the proposed sports stadium needed to be 'put at the back of the queue.'

But two months later Lianne Dalziel, one of the key supporters of the stadium, was voted back into the mayoral office for a third term. She would of regarded her victory as support for the stadium -  even though there has been little public consultation over the project, other than the public submissions to the council's 2018-2028 long term plan.

During Dalziel's second term in office, the council spent a staggering $3 million preparing an 'investment case' for the stadium. Shortly before Christmas and with the summer break beckoning, the council approved the construction of a 25,000 seat 'multi-purpose' stadium.

Only Councillor Yani Johanson voted against the decision. He has been a consistent critic of the proposed stadium and has questioned its economic viability. He is sceptical that a relatively small 25,000 seat stadium will be able to attract one off events to Christchurch and has pointed out that a $56 million 'incentive fund' has been budgeted in order to 'encourage' acts to come to the city.

Johanson is also critical that the New Zealand Rugby Football Union (NZRFU) has not made any commitment about future All Black tests being played in Christchurch.

'The financial reality for us as a city is we cannot continue to subsidise professional sports with a populations base of just over 400,000,' Johanson told RNZ. ' There is too much risk and too much expenditure.'

But the Christchurch City Council has decided to take that risk. And it will be the good people of Christchurch who will be picking up the tab while everyone from music promoters to the NZRFU will be walking away with the profits.

Not only is the council sinking over $250 million into the stadium, it is sinking public money into a stadium that won't make any money. The investment report says that the stadium will not only cost over $4 million a year to maintain, its expected to lose $70 million over the next thirty years. This is a conservative figure and the loss could be greater. The people of Christchurch will still be paying for this stadium long after Lianne Dalziel and co have left public office.

In the face of these ugly numbers, Dalziel has spun a tale of 'civic pride':

She has been backed by, among others, Adam Naiman, senior manager at the accountant firm EY  and who was part of the team that put together the $3 million 'investment case'.

He says that the stadium is being built for 'reasons of civic pride and for economic regeneration and economic vitality.'

Folk who are struggling to find affordable housing will probably regard the cost of 'civic pride' as too high. Toward the end of last year there was an estimated 900 people on the social housing waiting list. In April last year some Christchurch councillors described the wave of people needing accommodation as 'a tsunami'.

In the poorer eastern suburbs of Christchurch, which haven't seen anything like the money ploughed into the central city since the quakes, the cost of 'civic pride' will also probably be regarded as unacceptable. The sports stadium has been greeted with both indifference and outright hostility. Certainly Councillor Pauline Cotter did not  regard the stadium as a vote winner when she was campaigning for re-election last year in the eastern ward of Innes. Even though she has consistently supported the stadium she failed to mention that in any of her election material.

As for 'economic regeneration and economic vitality' businesses near the stadium like restaurants and hotels might win from some extra local spending but why should the good people of Christchurch have to pay so that a few favoured businesses can reap extra profit?
Posted by Steven Cowan on Tuesday, January 21, 2020