THE POLITICS OF LOW EXPECTATIONS 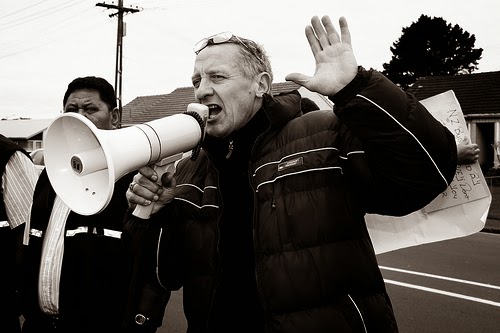 Mike Treen, national director of the Unite Union, thinks voting for a neoliberal Labour government is 'better' than not voting.

In an article on the Daily Blog Mike Treen, the national director of Unite,  surveys the health of the western  left and comes to the conclusion that there are a few promising 'red shoots'.

Some of the article I agree with, some I don't.

I don't, for example, agree with Treen's  'once over  lightly' approach to the British Socialist Workers' Party. This is a party that has  lost hundreds of members  as a result of the central committee's attempt to bury a rape complaint against a senior member.

For Treen to characterise  this simply  'as a deep-going crisis inside the British SWP that is producing a sophisticated discussion on the relationship between reform and revolution' really isn't good enough.

He  betrays  his obvious sympathies for the sectarian SWP  by avoiding mentioning  the International Socialist Network that has emerged out of the SWP's failure.

The ISN is in discussion with other British  socialist organisations to form a new party. This development offers more for socialist politics than anything the discredited SWP can offer.

I would of thought that the effort to create  a united, plural and heterodox revolutionary tendency on the left in Britain was an emerging  'red shoot'?

Whilst I don’t accept Brand’s argument that we shouldn’t bother to vote I have a lot of sympathy for where he is coming from. A big reason why many people have stopped voting is that they have experience after experience of governments (of either the traditional right or left) which carry out policies that seem only designed to protect the rich and screw the rest of us. Often they carry out policies that are the opposite of what they campaigned on.

Why does Treen dismiss  the idea of not voting, especially since it is all the rage in New Zealand?  It is tokenistic for him to say that he has a lot of sympathy  for such a view but only to the point that it isn't carried out.

The reason  is that Unite, a supporter of the Mana Party, has fallen in behind the bid to get a
Labour-Green-Mana government elected next year. Rather than beginning the hard work of building a new left movement in New Zealand, we're being offered the politics of minimal gain and no vision.


Labour has no intention of upsetting the neoliberal applecart  and has made that abundantly clear on several occasions.

Unlike Mike Treen and Unite  it seems, the electorate has sussed this out. The June  Rawhiti-Ikaroa by election saw  nearly 23,000 eligible voters decide not to vote.The combined vote for all the candidates was just 10,000 votes. Mana itself got just 2,600 votes - not quite 'the big night' that the Daily Blog editor Martyn Bradbury had been predicting.

What we know is  that Mana often talks alternative and appears alternative, but it clear that the Mana leadership will do a deal with Labour. This has become Mana's default setting.  Treen wants people to vote for this bowl of cold gruel and the campaign to make people vote for it  will obviously pick up come 2014.


It is clear that much of the electorate   have adopted a critical attitude to the real sources of the social and economic problems that they confront everyday. For Treen to suggest that the solution is a Labour-Green- Mana government in 2014 is nonsense and betrays a lack of real political will to break with Labour.

Ironically he condemns the Australian union movement for having  allowed itself to be in the 'death grip' of the pro-capitalist Labour Party machine but he doesn't offer a similar criticism for the bureaucrats who control the New Zealand union movement. Given that Unite is supporting Labour - via Mana - that probably wouldn't be a good look.
Posted by Steven Cowan on Monday, November 18, 2013