Our young people are worth more than a few  low paid and insecure jobs in Christchurch. If they can find a job, that is. 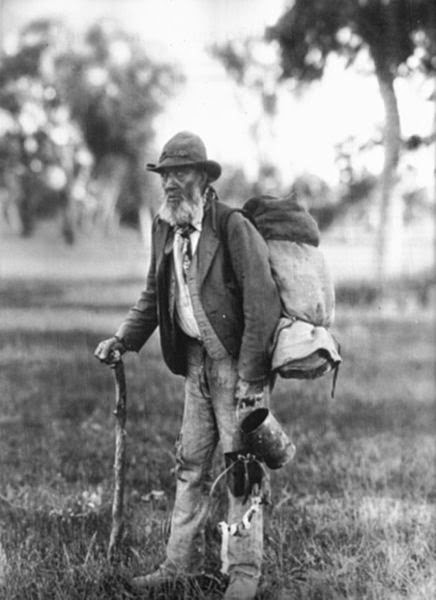 IN THE 1930s many unemployed people who could not find work where they lived often took to the road. They became known as 'swaggers' or 'swagmen'. It was a term used to describe an  underclass of transient temporary workers, who travelled by foot from farm to farm carrying the traditional swag or bedroll.

One talks of hard times. I remember when times were as bad or worse than they are now. I have seen men walking around the Island month in month out looking for work and nothing doing...I have seen men walking for nine months of the year and only get if they had luck three months work in the rabbit poisoning season..I know in one or two cases of men being found dead on the roadside..one man found dead on the road had only raw turnips in his stomach.'  (Weetman Papers, Alexander Turnbull Library).

Also in the 1930s the Government introduced work camps in rural areas. Unemployed workers were used mostly in forestry, road building and swamp drainage. Indeed many of New Zealand's state  forest plantations were the result of  gross exploitation  -  planted by men living in the work-for-dole camps.

Over eighty years later have we moved on? Most of us probably like to think we have and the mainstream media invites us to believe that.

But, as in the 1930s, twenty-first century capitalism has  failed to deliver the promised  economic goods for most people. While the tame economists talk of 'economic recovery'  and a 'rock star economy', this so-called 'recovery' has left 99 percent of us mostly untouched.

While we may no longer have men dying of starvation on a public road, the level of poverty is such that the food banks consistently say they are  struggling to cope to meet the demand. Statistics NZ`s Annual Economic Survey for 2013, tells us 14 per cent of respondents stated that they did not have sufficient food. Beyond that 14 percent another considerable slice of the population is just making ends meet. Somehow.

These kind of figures make the government's crowing  about a slight decrease in the 'official' unemployment rate sound increasingly shrill and hollow . All the more so because the extraordinary inaccurate Household Labour Force Survey actually masks the real rate of joblessness.

Too many people are  not just  out of work  but are stuck in minimum wage jobs or in part time or casual work. They are the working poor.

While the Government often likes to blow smoke about having a job being  ‘the best route out of poverty’  for an increasing  number of  people simply  'getting a job' can be just a turn in the cycle of recurrent poverty – and of long-term churning between low-skilled ‘poor work’ and unemployment.

The Government has waded again  into this social disaster by announcing that it is 'inviting' one thousand young beneficiaries (18-24 years of age) to seek work in Christchurch. If they can find work, 'the new swaggers' will be given a $3000 grant for relocation expenses.

I can't decide whether this policy is exploitative or cynical. Perhaps it's both.

While it might be a few steps  away from forcing  people into work-for dole camps, this solution is equally as despairing. Move to Christchurch - and abandon all hope.

Finding work - even the most insecure and low paid work - is the government 'solution' to unemployment.

Many young people have little predictably or security in their lives and the Government is seeking to exploit that  by sending 1000 young beneficiaries to work in low paid and unskilled jobs in Christchurch - although many local employers are saying that there are simply not enough jobs available.

Given that some 7000  people are classified as homeless in Christchurch, finding somewhere to live will be a Herculean task in itself.  And given the exorbitant rents  now being demanded by  landlords/vampires, it is unlikely that any of these new prospective workers will be any better off.

What worries me a lot about this policy though is the message it sends to young people. The talk is mostly about the numbers, the impact it will have on the economy and blah blah blah. Young people are evaluated  merely in terms of how 'useful' they are to capital. We might as well be talking about cans of baked beans.

To oppose this policy just on the grounds that there is nowhere to house an influx of young beneficiaries into Christchurch misses the point. As does objecting to the policy on the grounds that $3000 isn't enough to adequately cover relocation costs.

I think our young people are worth more than a few low paid and insecure jobs in Christchurch or anywhere else for that matter.

The writer and artist John Berger noted: “The poverty of our century is unlike that of any other. It is not, as poverty was before, the result of natural scarcity, but of a set of priorities imposed upon the rest of the world by the rich. Consequently, the modern poor are not pitied, but written off as trash.”

Quote from George Weetman taken from Born of Hunger, Pain and Strife:150 years of Struggle Against Unemployment in New Zealand by Karen Davis. Published by the Peoples Press, 1991.