THE CRUMBLING PLANS OF GERRY BROWNLEE 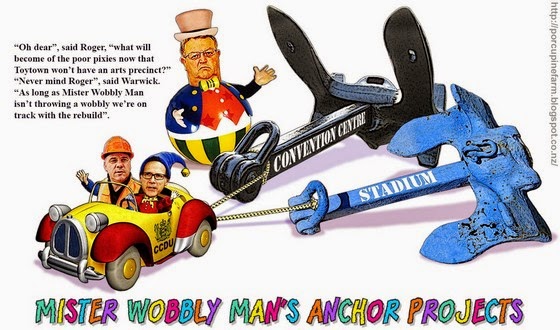 The Government's  corporate-approved 'grand plan' for central Christchurch is disintegrating before our eyes.

IT IS NOT difficult  to work out that the Government's grand plan for central Christchurch is in serious trouble.  It isn't about to spectacularly  collapse, but rather slowly crumble as various pieces of 'the Blueprint' fall off. That is what is happening now and Gerry Brownlee's assertion that 'he is pleased with the progress being made' is fooling very few.

Despite claims that this year was the year that the rebuild was to really begin, we're nearly half way through 2014  and this year will be just like 2013. And 2012.

What construction work that is going on is happening elsewhere, away from the 'Evil Empire' of the Canterbury Earthquake Recovery Authority (CERA) and Gerry Brownlee.

The Christchurch City Council has intentions  of passing by laws  to curtail such building activity, in  a attempt  to 'protect' the central city. But such by-laws are over a year away and, anyway, this particular  horse has long bolted, bought an air ticket, and is presently living it up on the Gold Coast.

Gough has yet to finish stage one of the project but he told the  local media that costs had already exceeded expectations. He's also been having trouble signing up tenants for the project. Gough has indicated that the 'reassessment' will result in 'a scaled back project'. We're not likely to see any more work on 'The Terrace' this year.

In September last year Canterbury Earthquake Recovery Minister Gerry Brownlee hailed Gough as the CBD's "greatest champion". 'The champion', while he hasn't been knocked out, is a little punch drunk at this stage of proceedings.

It is also a little embarrassing for Roger Sutton that his monthly video update has him standing in front of Gough's stalled project. Says the excited CERA boss: 'Behind me, Antony Gough is well underway with his Terrace development, which is going to be a collection of shops, restaurants and bars. It's really fantastic to see progress going on in this part of town'.

Would you buy a second hand car from Roger Sutton?

'Scaling back' is the popular theme of the moment. It has also been announced   that the Arts Precinct  is to be  'scaled back' with land ,originally earmarked for the performing arts precinct,  no longer of interest to  the Government.

And the National Business Review has reported  that proposed major  tenants,  the Court Theatre, the Symphony Orchestra and the Music Centre  have all said they cannot afford  the high rentals that are being demanded  in  the proposed new buildings.

The Government's  new 'fail'  is the 'Innovation Precinct'. It is also destined to be 'scaled back'.

A proposed central tenant of the precinct, EPIC (Enterprise Precinct Innovation Centre), has in the past week announced it is pulling out the project and also likely to  head for 'CERA-free' territory.

EPIC  had plans for an inner-city innovation "village" to house more than 50 small businesses and which Brownlee also  hailed as another shining example of the central city's 'revival'.

Why is it leaving?  Mostly because the land prices  being demanded by the Government are exorbitant.

EPIC co-founder Colin Anderson told The Press that  land prices in the designated precinct area "have tripled since we started this project".

THE SCALE OF  the Government's  plan was always bizarre for a city of some 400,000 and was inevitably going to run  into problems. Now the chickens have come home to roost. I'm not being wise after the event because I said this when 'the Blueprint' was launched three years ago and I having being saying  this consistently ever since. As have other people.

I think I have reflected the views of the good people of Christchurch who have always been suspicious and critical of the vast - and grossly expensive -  scale of the corporate-approved  Christchurch rebuild. But the voices of the community have gone unheard by those who thought they knew better.

The people who attended the launch of the grandiose scheme three years  ago -  corporate 'leaders', politicians  and various other establishment figures mostly applauded the plan.

They also supported the dumping of the  Christchurch City's Council's blueprint - which was the product of thousands of submissions from the good people of Christchurch. They contributed their ideas through the Council's  'Share a Dream' campaign.

But the draft city plan was not viewed favourably in the corporate sector.

Connal Townsend , the chief Executive of the Property Council,  wrote  in its 2012 Annual Report:

'By September Christchurch City Council had released a highly prescriptive draft Inner City Plan that generated considerable disquiet throughout the country. The release, on 13 October, of the formal letter from CERA  to Mayor Bob Parker advising the city that the inner city plan was not  acceptable to the crown in its present form as it did “not represent  the requirements or aspirations of commercial property owners or  investors” was a great relief'.

Tony Sewell,  National President of the Property Council (and Property Manager with Ngai Tahu), shared a  similar elitist and undemocratic  view.  He wrote in the annual report:

'...On 13 October, months of hard work by National Office and the South Island Branch Executive paid off when the new Christchurch re-development agency, CERA, formally rejected Christchurch City Councils Inner City Plan - and resolved to develop a new plan in house - this time in consultation with Property Council members....'

CERA  showed its true colours and did the bidding of the corporate sector and the Christchurch  Central  Development Unit (CCDU) went ahead and developed a corporate-friendly plan.

'I, like so many others, am staggered by the vision and the boldness of what the CCDU team produced.' said Sutton at the launch of the CCDU's blueprint.

Mark Solomon, the Chair of  Ngai Tahu, commented that the new 'revised' plan: '...provides a robust framework to promote community, business and investor confidence in the city.'

Canterbury Employers Chamber of Commerce chief executive Peter Townsend described the plan as 'exciting and just what Christchurch needs'  and  promptly exhorted the Christchurch City Council to sell  public assets such as the airport and Lyttelton Port to help pay for it.

Townsend, one of Brownlee's chief cheerleaders,  is now blaming CERA and the council for not 'providing support for developers'.

The din of alarm bells at CERA should be deafening. The Blueprint is an unaffordable, unattainable, unnecessary restriction that is stifling the recovery of Christchurch. The Minister needs to put his pride to one side, and accept that it is time to reevaluate the rebuild, before it is too late.

I agree with James Dann to a point. The point where we part company is in his appeal to Gerry Brownlee's 'good sense'.

I think asking  Brownlee to put aside his pride and puffery is still putting the fate of Christchurch in the hands of someone who clearly isn't up to the job. And  Brownlee and his allies are not ideologically disposed to making concessions to the local community anyway.

Rather than hoping, forlornly, for Brownlee to change his ways,  a real recovery can only occur when the people of Christchurch take control. For a people's reconstruction process to become a reality local people  must be at the centre of all decision-making. It is time to stop accepting that we are merely 'observers' while others make decisions 'for us'.

Only a powerful, unified, and organised political opposition can lead to an altogether different  vision of the new Christchurch.

Which is, on the surface at least, easier said than done. But why should it be? Christchurch should be rebuilt by the people who live here - not by government bureaucracies and the corporate interests that they serve.
Posted by Steven Cowan on Sunday, May 04, 2014 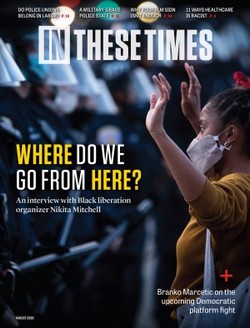