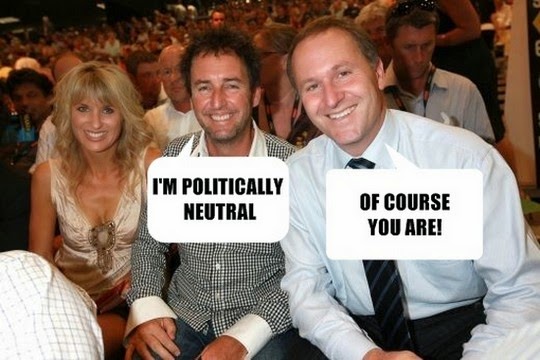 The Labour Party does not want Mike Hosking to chair the live television debates between David Cunliffe and John Key - just because Hosking is a vocal supporter of the National-led government. How unreasonable.

While introducing Key, Hosking  endorsed the Prime Minister and his government:

"I've done my own state of the nation. As I see it, all things considered we are doing pretty bloody well. We box above our weight. We have bright prospects for the future, so long as you keep them in Government.'

Given an endorsement like this and his constant attacks on David Cunliffe, it is hardly surprising that the Labour Party are not happy that TVNZ have decided that it will be Mike Hosking who will chair the live televised debates.

What is also not surprising is that TVNZ are determined to stick with Hosking - after all, they have allowed him to use Seven Sharp  as a vehicle to promote National and attack Labour.

Hosking's protestations that he is accused of being biased from all quarters, implying that he isn't, doesn't hold water when we reflect that John Key has never been the subject of Hosking  'witticisms ' like these: ''Is David Cunliffe incompetent or mad? Is he out to lunch or out of touch?' and 'Is David Cunliffe deluded or living in a parallel universe?