Seven Sharp promotes a visiting US presidential hopeful who has compared gay people to paedophiles and people who engage in bestiality. 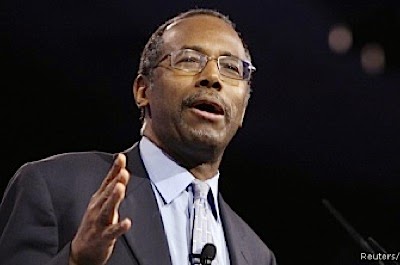 NOT CONTENT in just allowing Mike Hosking to promote the National Party and take potshots at the Labour Party in his end-of-show monologues, Seven Sharp is now promoting right wing politicos from other countries.

Carson was described   as 'inspirational' who just  'wants the kids to read.'  Cue to pictures of  the nice Dr Carson walking through a playground.

Missing in any of this cloyingly sycophantic  profile was any examination of his extraordinary  right wing views.The item  mentioned that  'people' want   Carson to stand for President of the United States but didn't think there was any need to go into any details into what he actually stands for.

Carson has said he will seek the 2016 Republican nomination for the Presidency.

He  is a right winger of the Tea Party variety, who has described America as a 'shambles' - and he's not talking abut the fact that it is now estimated  that more than 50 million  Americans now live below the poverty line.  According to 'inspirational' Dr Carson,  America is a 'shambles'  because a 'long line of progressive-minded policies that have seeped into national culture and politics.'

“Get a book called ‘The Naked Communist,’ written in 1958, a long time ago, that lays out the whole secular progressive agenda, a large part of which is to kick our Judeo-Christian values to the side,” Carson said during one interview

“And what we have today,” he said, “are those who say, ‘well, there is no such thing as the ideal family, [and that] every family situation is of equal value and this whole traditional family thing — this is what people who are bigots and religious fanatics talk about,’

He then proceeded  to blame the education system , particularly the universities,  for helping fuel such an atmosphere by shutting down commencement speeches from conservative leaders and encouraging students to rebel against those with traditional views.

Last week Carson was in the headlines again when he said that abortion  was' a heathen human sacrifice'.

He has also described Obamacare 'as the worst thing to have  happened in the United States since slavery'.

A regular guest  on the right wing Fox News,  last year he told host Sean Hannity that gay people were like paedophiles and people who engage in bestiality.

Said Carson: “My thoughts are that marriage is between a man and a woman. It’s a well-established, fundamental pillar of society, and no group, be they gays, be they NAMBLA, be they people who believe in bestiality, it doesn't’ matter what they are. They don’t get to change the definition.”

Seven Sharp neglected  to tell its audience any of this. What a disgrace.
Posted by Steven Cowan on Thursday, July 03, 2014