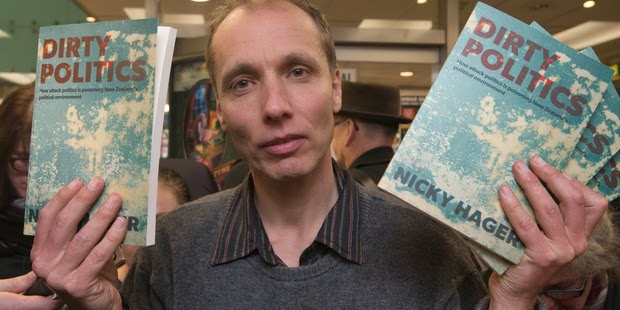 It could only have been someone like Nicky Hager who could have written Dirty Politics.

THIS MORNING I listened to Morning Report's Brent Edwards explain that John Key's  apparent strength  has always been his ability to portray himself as being 'above politics'. John Key has liked to cultivate an  image of himself as a  good, genial bloke who likes his rugby and a beer or two at the barbie. He's the guy who likes to share a laugh or two with his mates, Si and Gary, on More FM.  When he's not doing that, he's cooking on TVNZ's Good Morning show.

If John Key  has been able to cultivate this cartoon  image of himself  it has only been  because a mainstream media has, for  most of the time, allowed him to do it.

Certainly the left - whether  it be soft or hard - has largely  never been conned by 'Brand Key'.  He's been the frontperson for a government that has  enriched the wealthy and pauperised the poor. While John Key has been  having his photo taken with Richie McCaw, Paula Bennett  has been putting the boot into beneficiaries.

But our  voices have largely been confined to the blogosphere. Within the mainstream media a cabal of journalists have forgotten that their  job is to speak truth to power and not to chat pleasantly with the Prime Minister on a  sofa in a television studio or write another friendly newspaper column about his government. And it certainly isn't a job of  a television host to  use a prime time television show  like Seven Sharp to cheer on the government while berating and making jokes about its political opponents.

But what Nicky Hager has done is blow apart the mainstream media's  cosy relationship  with the government, a relationship  that has conspired to leave the neoliberal  orthodoxy unquestioned and intact. This is a neoliberal orthodoxy that has journalists like Radio Live's Duncan Garner declaring that John Key  is doing 'a good job' managing the economy - instead of giving voice to the 270,000 children living under the poverty line.

It could only have been someone like Hager, outside the mainstream media, who could have written a book like Dirty Politics - with, of course, some not insubstantial  help from someone who gave him access to the treasure trove of data obtained from the Whaleoil website. It could have only been someone like Hager because mainstream journalists in this country are only too willing to defer  to government.  Indeed many journalists in this country have used Whaleoil as a legitimate news source.  Very few will no doubt admit to that now.

The media would retort that they just report the 'facts' but an increasing number  of us  have way too  many problems with what the  mainstream media define as  'facts' - and how they frame those 'facts'.  The media has  continued to foster a stubborn editorial bias under a veneer of “objectivity”.

Initially the media  were  seemingly willing to accept the Prime Minister's  claim  that Dirty Politics was all part of a 'left wing conspiracy'. Government cheerleaders like Mike Hosking and Sean Plunket were happy to promote the government line that Kim Dotcom was somehow pulling all the strings.

But these sort of arguments have become plainly ridiculous and untenable, especially now that #whaledump on Twitter has begun uploading the Whaleoil emails to the web, for all to read. This is the age of digital empowerment! If Brand Key has been severely damaged then so has the credibility of a swathe of journalists who have promoted that brand.

I'd like to think Nicky Hager has demonstrated that the political agenda does not have to be controlled by government and its allies  in the mainstream media.  In this digital world  we have the power to upset the conservative agenda  that protects the rich and powerful. We certainly do not have to accept it.