THE REAL DIRTY POLITICS THAT NO ONE TALKS ABOUT 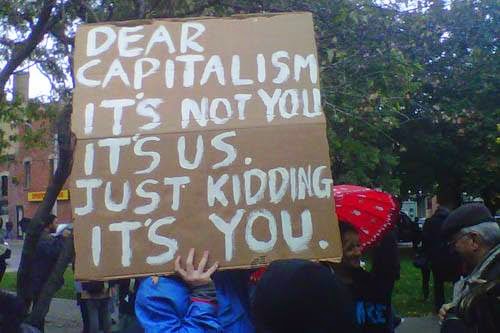 THE ISSUES THAT DIRTY POLITICS has raised go much further than the machinations of Cameron Slater, Judith Collins, David Farrar and friends  whose activities Nicky  Hager's  bestselling book has so thoroughly exposed.

These issues are symptomatic of a far wider malaise that  none of the parliamentary parties can solve because they themselves  are part of that malaise; a representative democracy that is neither representative or democratic.

Over three decades of this  country being under the iron heel of neoliberalism has seen the further emergence of an ever more unresponsive  and essentially collusive political system where all the political parties are implicated in defending and upholding the neoliberal  model of economic organisation. To talk 'of 'left' , 'right' and 'centre' politics in this context is misleading to say the least  because there is  not one political party, without compromise, that  has set its face firmly against the economic orthodoxy. It is sadly indicative of the regressive  times we are living in  that a so called 'left wing commentator'  can describe a crowd chanting  'F**K YOU, John Key'  as 'revolutionary'. Or that Russel Norman and the Green Party are still described as 'left wing' by mainstream commentators despite the fact that Norman has stated that the Green's are 'more pro market than the National Party',

It is this insular and remote environment , where the political system has  become detached  from the public sphere, that people like Cameron Slater and Jason Ede have been able to operate in relative impunity -  exactly because there because there is no meaningful  public accountability.  We have seen the establishment of a political apparatchik that owes its allegiance to those who seek to dominate us. The 'great unwashed', like you and me, have been shut out.

Those of a more  liberal bent  might have fondly thought that the fourth estate would act as the democratic brake on the excesses of those in power. But the media  has  become so thoroughly embedded in the machine that while we might thoroughly despise Cameron Slater, only a  few  short steps behind him are other  equally determined defenders of the status quo like Mike Hosking, Sean Plunket and most of the NZ Herald's columnists.

Indeed Slater's bitter remark that some of the journalists going after him  now are exactly the same journalists who, in previous times, have been happy to use him as a source of news stories is undoubtedly true.

And journalists and commentators who like to think they are 'liberal' or 'left wing' are not blameless either.

While they have thoroughly castigated Slater and his political allies their so-called  'solution' is that we again put a  faith in a  failed representative democracy and vote for a capitalist-friendly Labour-led government. Just like last time. And the time before that.

The only reason to vote is if the vote represents power or change. I don't think it does. I fervently believe that we deserve more from our democratic system than the few derisory tit-bits tossed from the carousel of the mighty...'

The only thing  that is certain that will come out of this election is that nothing much  will change. 'Vote positive!' is the call but the fact is that we are being offered as much choice as a Stalinist one party state. That is the real 'dirty politics'. The difference is that the political elite would rather not talk about this because, then, the game really might be up.
Posted by Steven Cowan on Monday, September 08, 2014