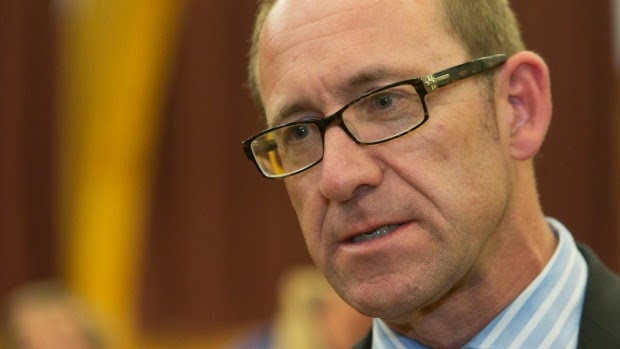 Labour leader Andrew Little redefines the working class out of existence. His speech is praised by Phil O'Reilly  of the Employers Federation and Michael Barnett of the Auckland Chamber of Commerce. And by readers of the Labour - leaning website, The Standard.

THE NEW LABOUR leader chose to give his first keynote address to an audience  that he and the Labour Party feel  the most comfortable with and have done much to enrich - the business community. In this case it was the Auckland business community.

Little wanted to tell business interests that the Labour Party was not a party of the working class. Anyone knowing anything about the sophistry that Andrew Little employed as a right wing  union boss will know that Little rarely says what he really means, unless he thinks there might be some immediate political benefit for him. Most of the times he speaks in code. In yesterday's address Little said farewell to the working class by simply redefining it out of existence.

This will not be a vote winner with the very working class that abandoned Labour at the general election. And it certainly will not convince million or so New Zealanders who did not vote this year because they do not think there is a  party that explicitly  represents their interests. In the absence of a genuine left alternative, another triumph for the Did Note Vote Party in 2017 is inevitable.

But simply  redefining the working class to suit you're own political agenda does not change the dominating reality that we still  live in a capitalist economy where the means of production are owned by a few at the expense of the many.

The fact  is that inequality of wealth and income has risen significantly in New Zealand, as elsewhere,  over the past three decades. For  a discussion of this global  development generally Capital in the 21st Century by economist Thomas Pikkety is worth a look.

But there was nothing in Andrew  Little's address that even hinted at a recognition of the devastating impact that neoliberal economic policies have had on this country. Of course Labour was responsible for implementing the majority of these polices and as a union boss Andrew Little, was part of a union bureaucracy that actively  backed Labour to the hilt.

Little instead announced Labour's intention to establish something called  a 'Future of Work Commission' which will supposedly develop a long term plan for the economy. He and Labour think that the problem is a 'dysfunctional' capitalist economy - not capitalism itself.

The commission will be chaired by Grant Robertson, who is already on record as saying that Labour has no intention of 'interfering' with the market. In other words it will be the priorities of business that will continue to dictate economic policy rather that the interests of ordinary people.

I often read posts by bloggers on Labour-linked blogs like The Daily Blog and The Standard complaining about the difficulty of combating 'neoliberal propaganda'. One such 'left wing' blogger, Martyn Bradbury,  has sarcastically referred to the 'sleepy hobbits of Muddle Nu Zilind.' for their refusal to vote for his 'progressive' Labour-led coalition.

But there is a natural constituency that is opposed  to privatisation, for defence of the health, education  and welfare sectors, for the introduction of a shorter working week, for the nationalisation of key areas of the economy such as the electricity industry and telecommunications. Labour is not articulating such policies and never has. And it won't under Andrew Little.

It is not ordinary people who have brainwashed into  accepting ‘neoliberalism’ but people like Martyn Bradbury  who continue the peddle the fantasy that Labour is somehow still 'left wing' and that it can somehow be 'reconquered' from within. And, anyway, it is still the 'lesser evil'.

How bad is the affliction?  Pretty bad. The Standard website is essentially a mouthpiece  for the Labour Party  and you get a good idea of where, politically,  Labour  supporters are at  by the glowing comments they made about Andrew Little's dismal speech. Apparently Little is not bidding farewell to the working class at all.

According to an approving  'music4menz'  Little is  moving "the Labour Party towards the middle ground, towards ‘the boardroom’ as he puts it"  Meanwhile Te Reo Putake thinks  that  Little is abandoning 'the Blairite surrender to neo-liberalism that has hobbled labour parties worldwide for the last 20 years.' And 'Whateva next?' is under the impression that Little has 'a real insight into the needs/ aspirations of real NZers.' And so it goes on.

Michael Barnett  from the Auckland Chamber of Commerce joined readers of The Standard in praising  Little's speech. He said he was left with 'a positive impression'. And the corporate media has also largely  swung in behind the Labour leader. Rachel Smalley of Newstalk ZB and sometime host of TVNZ's Q+A, opined that Andrew Little was off to "a solid start".

Michael Barnett later had a private chat  with Andrew Little and happily declared that he was "not intimidated" by the new Labour leader. Which does not come as any surprise. I'm sure he will be a pleasure to work with.