We look back at the role of Andrew Little and the Engineering, Printing and Manufacturing Union in the Pike River mining disaster.

I don't usually repost my own posts and, in fact, this is the first repost I've ever done. But I think it is  worth giving this story another airing given the rise in political prominence of Andrew Little. I considered rewriting the story but I think the original post speaks for itself. It outlines the role of the Engineering, Printing and Manufacturing Union (EPMU) in the Pike River mining disaster, which saw 29 men lose their lives.

Labour Party leader Andrew Little was national secretary of the EPMU at the time. This story was first published on 8 November, 2012.

Last month Andrew Little went to Pike River to attend the memorial to mark the fourth anniversary of the tragedy. He told the media that he attended the commemorations to stand alongside the families.

WHEN THE  Royal Commission of Inquiry into the Pike River mining disaster issued its report  this week, the response of the Engineering, Printing and Manufacturing Union (EPMU) was immediate. It issued a press statement welcoming  the  report and is encouraging the Government to implement the recommended  changes as soon as possible.

The statement quoted EPMU assistant national secretary Ged O’Connell who declared that  the report should mark a turning point for mine safety in New Zealand:

The report makes clear that the tragic loss of life at Pike River could have been prevented with stronger regulations, an independent and well-resourced mine safety inspectorate and genuine worker involvement in health and safety.

We hope the failings exposed in this report spell the end of the deregulated health and safety regime of the last 20 years. This vindicates the union’s repeated calls for improvements in mine safety and for the reintroduction of check inspectors.

This statement represents a complete change of heart by the EPMU officialdom because it was never critical of  Pike River Coal (PRC) during the time that  the mine was open. The EPMU represented approximately half of the 140 miners on the site.

After the first explosion the EPMU strongly defended the management of PRC.

EPMU National secretary Andrew Little (now a Labour MP)  told the New Zealand Herald on November 22  2010 that  there was "nothing unusual about Pike River or this mine that we’ve been particularly concerned about".

He then appeared on TVNZ's  Close Up  to again defend PRC management.

He told Close Up that underground mining was inherently unsafe and the risk of gas explosions, particularly on the West Coast, was high.

While the industry was aware of the risks and took the necessary precautions, unfortunately these kinds of incidents still happened, he argued.

On November 26, 2010 the Dominion Post  ran an article that denounced 'wild' rumours that the mine was not safe. It declared  that  "Any suggestion of obvious or known safety lapses does not find traction with unionised staff or union leader Andrew Little." 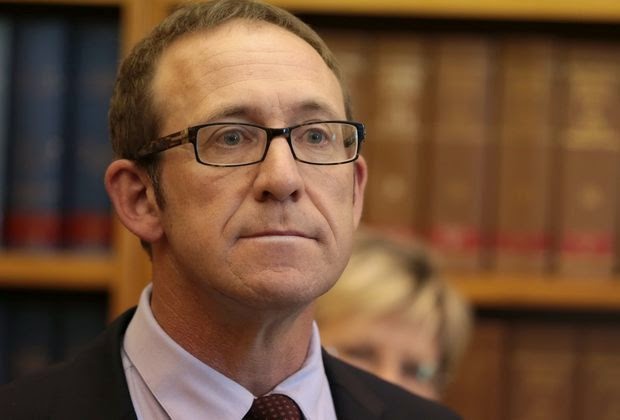 Andrew Little's conciliatory views toward  PRC management were echoed by Labour MP Damien O'Connor. He suggested that no one was responsible for the accident and that the  disaster was "just one of these things that the West Coast unfortunately has had to get used to over the years".

Little and O'Connor's views would of found  favour with the Minister for Energy and Resources, Gerry Brownlee. He insisted that PRC had "an absolute focus on health and safety".

So here  we had the Government, the Labour Party and the EPMU all lining up to defend the management of PRC.

At the  time this writer commented: "All workers at the mining site should be seriously concerned that the EPMU has such a benevolent view of its safety standards."

The views of Andrew Little and the EPMU flew in the face of expert opinion.

While Andrew Little  was defending PRC an Australian gas drainage engineer, who wished to remain anonymous because he feared 'recriminations', said he visited Pike River in 2009  and observed that its  operating standards were "extremely poor".

He said  that he had been told by miners  that the mine was flooded with methane gas about three weeks before the first explosion.

He said  miners had bored through 'high flow methane holes' without any risk assessment conducted or procedure on how to manage gas flow from the hole in place. He was critical  that PRC has not yet implemented a gas drainage drilling regime that could relieve the pressure when there was  a  build up of gas by drilling a hole in the coal seam.

The New Zealand Herald, also in November 2010,  quoted Gerry Morris of Greymouth, a former writer for Coal magazine, who said he had heard regularly from contractors at the mine "over the last two or three years that this mine is unsafe, there’s far too much gas, there’s going to be a disaster here one day".

But despite the overwhelming evidence that there was  something seriously and dangerously wrong at the Pike Rive mine, the officials of the  EPMU did nothing.

The mine opened in November 2008  and on not one occasion did the EPMU  initiate industrial action or even criticise PRC'S  safety standards, even after a group of workers  walked off the job to protest the lack of basic emergency equipment.

The walk out by miners was revealed by miner  Brent Forrester. He told TVNZ’s Sunday on December 5 2010 that  he once helped organise a walkout of about 10 miners to protest the lack of basic emergency equipment, including stretchers and an emergency transport vehicle. They received no support from the EPMU. Andrew Little  even insisted that  PRC "had a good health and safety committee that’s been very active."

It was exactly this benevolent attitude  by the EPMU that allowed PRC - and the Department of Labour - to continue as if it was just 'business a usual'. It appears that no-one was  protecting the interests and concerns of the workers on the mining site. The EMPU failed to organise industrial action  to address safety concerns  at the  mine in favour of  'cooperating' with management, what it and the CTU sometimes  refer to as 'modern unionism'.

There won't be any resignations from within the EPMU for dereliction of duty and, of course, Andrew Little  has escaped to Parliament.