Nicky Hager’s new revelations that the Government Communications Security Bureau (GCSB) is collecting in bulk the cell phone, email, and internet files of people across the Pacific Island nations and sending that data to the U.S. National Security Agency has provoked another cynical and hostile response from the Prime Minister's media poodles, including Mike Hosking.

USING DATA PROVIDED BY WHISTLEBLOWER Edward Snowden, Nicky Hager has revealed that the GCSB is spying on our Pacific neighbours and sharing communications it intercepts in bulk with the NSA.

In an interview with National Radio, Nicky Hager commented that ""The Five Eyes countries led by the US are literally trying to spy on every country in the world." The GCSB has been assigned the South West Pacific as its 'area of responsibility'.

Prime Minister John Key, as he did with Dirty Politics, has attacked Hager. 'He's just wrong,' he declared in a pre-emptive strike the day before Hager's story was published by the NZ Herald. "Hager's a conspiracy theorist'.

It won't be of any surprise to anyone that Mike Hosking was quick to come to the defence of Key, declaring that Hager was making a mountain out of a molehill.

"So we spy on Pacific Nations... For my part, I can't see why they wouldn't...just what is it they were expecting a spy agency to do if it's not to spy? And if we're part of the 'Five Eyes' group, doesn't it make perfect sense we spy on our part of the world?" 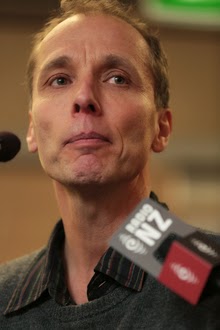 Hosking simply disregards the fact that the GCSB has violated the sovereignty of independent countries. Not only that, Hosking is entirely unconcerned that the GCSB is indiscriminately sweeping up data, including the private information of people who have committed no crime.

But it is, in some ways, pointless to argue with Hosking because his role is to defend the Prime Minister and the government, no matter what. He will do whatever it takes to help shield John Key from criticism.

Indeed it is the strategy of the mainstream media and which Hager writes about in Dirty Politics. At one point he writes of Key's apparent success : “Lack of media scrutiny is a big part of why John Key's government could get away with running the friendly, relaxed image while being involved in continuous negative politics”.

Lack of journalistic scrutiny is something Hosking has become very skilled at. But he's not the only practitioner.

On Radio Live yesterday another one of Key's media poodles was also describing Hager as a 'conspiracy theorist'. Sean Plunket also described him as a 'tabloid journalist who promises much, but delivers little.''

And, just for good measure, Plunket then stoked xenophobic fears with images of the 'yellow peril' sweeping across the South Pacific. "Do you want to hang out with Uncle Sam or Uncle Chan?" asked Plunket, who last year was warning of the dangers represented by 'the German Kim Dotcom."

His morning show was followed by ghastly arch-right wingers Rodney Hide and Deborah Coddington. They also launched into Hager. Hide described him as a 'bullshitter' but that was just one of many insults hurled at the internationally respected investigative journalist.

The other participant in this Nicky Hager Hate Fest was Chris Trotter. He attempted to defend Hager but the problem with Trotter is that he is as much as part of the corporate media machine as Hide or Coddington. Any dispute he has with them and others of a similar political persuasion just sounds like a temporary spat between media colleagues. You just know that Trotter will be sharing a joke or two with Hide and Coddington the next time they meet.
Posted by Steven Cowan on Friday, March 06, 2015