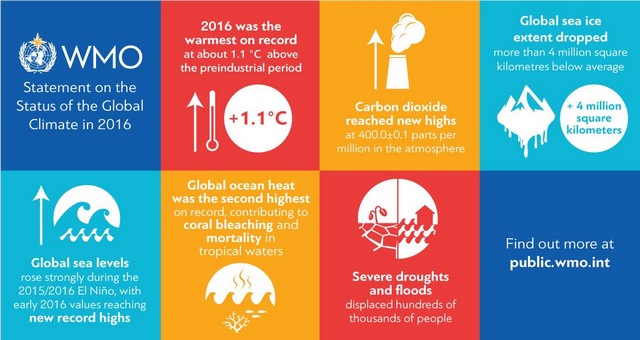 The world has entered an entered even dangerous period, with the impact of climate change becoming even more pronounced.

THE WORLD METEOROGOLICAL ORGANISATION (WMO) says that multiple records were broken in 2016, none of which we can be proud of.

It says that 2016 was marked by record global temperatures, exceptionally low sea ice, and continued sea level rise and ocean heat. These extreme weather and climate conditions have continued into 2017.

WMO issued its annual statement on the State of the Global Climate ahead of World Meteorological Day on Thursday 23 March. It is an authoritative source of reference.

“This report confirms that the year 2016 was the warmest on record – a remarkable 1.1 °C above the pre-industrial period, which is 0.06 °C above the previous record set in 2015. This increase in global temperature is consistent with other changes occurring in the climate system,” said WMO Secretary-General Petteri Taalas.

“Globally averaged sea surface temperatures were also the warmest on record, global sea levels continued to rise, and Arctic sea-ice extent was well below average for most of the year."

“With levels of carbon dioxide in the atmosphere consistently breaking new records, the influence of human activities on the climate system has become more and more evident,” said Mr Taalas.
Posted by Steven Cowan on Wednesday, March 22, 2017