TIME FOR A REAL CHANGE?

We're faced with the prospect of another neoliberal government, led by either National or Labour. Isn't it time to start building a progressive alternative? 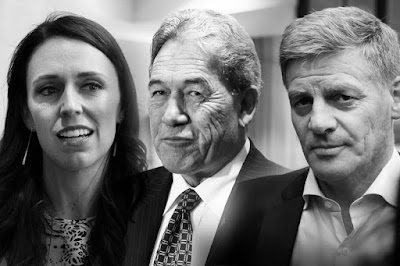 THE PRESENT DEGREE OF EQUAMITY on display by 'the market' demonstrates, if we needed such a demonstration, that corporate interests have little concern abut the future composition of the New Zealand government. While we, in theory, live in a representative democracy, the end result of our representative democracy will be yet another neoliberal government. It is little wonder that a significant section of the voting-age population no longer participates in a political exercise that leaves the status quo undisturbed. The system is rigged.

While there has been a lot of chat about the country living in a "MMP environment', this election was dominated by National and Labour. Both parties are heavily invested in the status quo. They have next to no interest in transformative change.

But, as Jeremy Corbyn and UK Labour have demonstrated, bold and transformative ideas that really hold up the promise of tangibly improving people’s lives can win elections or come damn close. We can also point to the political success of Bernie Sanders in the United States, Podemos in Spain and Left Bloc in Portugal.

But we are far from having a similar project in New Zealand. And one of the central roadblocks in the path to developing such a transformative project is an unwillingness of many on the left to give up on the Labour Party - indeed, when it comes to the crunch, to continually defend it. Even now, after three decades of Labour's slavish devotion to neoliberalism, many on the left are still no closer to acknowledging that the Labour Party has got nothing to do with the development of progressive politics in this country.

This failure exhibits itself time and time again.

For example Labour Party supporter and Canterbury University lecturer Brownyn Hayward concedes
that the "two major parties are very close, especially over political economy" but then hands Labour a 'get out of jail free' card by claiming that "this election Greens and Labour were both talking about social solidarity in ways that were very different from National and is an important crack where more light and new policy shifts could occur."

I think most readers would agree that this is pretty vague stuff. "Talking about social solidarity"? Even if you accept this claim on face value - and I don't - I'm not sure how much 'social solidarity' would be generated by a government dedicated to the divisive policies of neoliberalism. Also suggesting that the demands of the 'political economy' don't have a substantial impact on civil society certainly isn't a socialist view I'm aware of.

Speaking of 'not socialist', commentator Chris Trotter has also been tilting at windmills. Trotter's view of the Labour Party gyrates madly from gung ho support to outright criticism, but his default position is the hopeless view that the Labour Party is somehow still reformable. This week, he's been reduced to hoping that Labour leader Jacinda Ardern, who has demonstrated nothing but a dedicated loyalty to the status quo, will see the error of her neoliberal ways. Good luck with that.

And if you think I'm just picking on easy left wing and right wing social democratic targets (is there really a difference?), the International Socialist Organisation (ISO) is still under the impression that the New Zealand working class identifies with the Labour Party.

So the ISO has admonished those of us on the left who have the bad taste not to support Labour at the polling booth:

"Not one of the small groups that constitute the revolutionary socialist left have come out for a Labour vote. Instead, we have every variety of sectarianism, including calls for boycott and abstentionist indifference."

But when we strip away the ISO's verbiage, what remains is the drearily familiar argument that a Labour-led government is somehow 'preferable' to a National-led government. It is the discredited argument of 'lesser evilism'. But Victoria University academic and ISO member Dougal McNeill claims that the argument of 'lesser evilism' is "not helpful' and claims it has merely been imported from the United States. So, says McNeill, there's nothing to see here, move on...

I much prefer the sensible view of former Green Party MP and long time activist Sue Bradford, In her paper 'Why We Need A New Left Wing Party' she writes:

"In the 2014 general election, nearly 730,000 of those enrolled to vote did not cast a ballot. For the first time in my life I was one of them. I could not see that any of the three parties of the ‘left’, Labour, Greens and Internet Mana, had any serious intention to begin to move us beyond capitalism and colonialism, especially given the deviant road Mana had taken in its alliance with Kim Dotcom. I totally rejected the notion that it was better to vote for a social democratic party than to cede the field to National. I did not trust that a new Labour-led government would do any better than they have in the past, where often enough the plight of the people whom I have worked with most of my life, unemployed workers, beneficiaries and their families, has been worsened rather than improved by a victorious Labour government. The Greens still have many good policies and people within their ranks (as do Labour and Mana, for that matter), but have become increasingly a party dedicated to promoting socially and environmentally responsible capitalism. The Labour-Green Budget Responsibility Rules agreement signed in March 2017 was the clearest signal yet that the Green Party now places a business-friendly commitment to fiscal control over any serious intention to legislate for major and effective economic, social and ecological change."

"We must build a new kind of party, one that has not been seen in this country for a long time, if ever, capable of mobilising people and resources on a scale that can achieve a future far better than the one capital has mapped out for us and our children. To do this well will require bravery on all our parts, and a huge amount of sensitivity and care as well. It is important that we refrain from telling ourselves the task is too difficult. We can do it, and our time is now."

In the immediate future, we're faced with the prospect of either a National or Labour-led government and a government committed to the interests and concerns of capital. Most of the left will either retreat to its familiar position of criticising the National-led government while hoping for better things in 2020. Or will become an apologist for the Labour-led government. It will rationalise that position by claiming there is a 'opportunity' to push Labour to the left because, after all, it is 'the lesser evil'.

So when a Labour-led government - if it does eventuate - continues the austerity regime that will see no relief for the poor and beneficiaries, we can be comforted in the knowledge that it would so much worse under a National-led government...

Unless, of course, we just say we can no longer accept the status quo and begin the hard work of building a real political alternative.