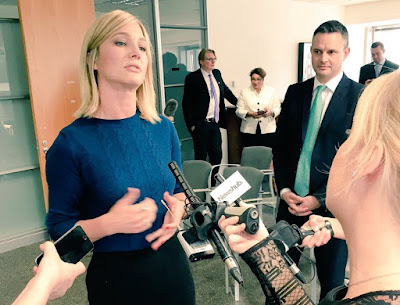 IF YOU READ any Labour Party-supporting blogger or commentator over the nine years of the National-led government, you would have inevitably struck frequent attacks on the mainstream media for playing political favourites. Labour wasn't getting a fair shake of stick was always the complaint. And with such government cheerleaders as TV3's Paul Henry and TVNZ's Mike Hosking in major positions of influence there was a validity to such a view.

Nor were matters helped when liberal favourite John Campbell was dumped by TV3. The channel claimed it was because his ratings weren't good enough but the suspicion was that Campbell's earnestly liberal views clashed with the conservative politics of the people who made the programming decisions.

But these very same critics of political partisanship in the media have been conspicuously silent about the appointment of former Green Party candidate Hayley Holt as a co-host of TV1's Breakfast. This is the same Hayley Holt who tweeted "Sometimes I get choked up about thinking how bloody proud I am to have @jacindaradern as our PM. NZ is on the right side of history today."

Such political adoration for Ardern would have been met with howls of outrage from Labour supporters if it had been directed at National Party leader Bill English.

Someone who has come to the defence of Hayley Holt is Martyn Bradbury of The Daily Blog. Bradbury, a Labour supporter who routinely complained about pro-National government bias in the media , claims that Holt's appointment is fine because she "wasn't really a serious candidate for the Green's"

Don't bother attempting to understand the rationale behind this argument because Bradbury then effectively says its quite alright for TVNZ to make political appointments. He writes: "She’s been appointed as part of TVNZ's recognition that a change of Government is here, and it’s their prerogative to do that."

Well, in that case, it was entirely TVNZ's prerogative to appoint Mike Hosking to co-host Seven Sharp. Bradbury can't have it both ways - although that doesn't stop him from trying.

But Hayley Holt's appointment reveals that Labour supporters like Bradbury have only been concerned abut media bias because that bias has not suited them.

I have no real opinion about Holt's appointment other that she strikes me as being yet another ho-hum presenter who will provide little  new political insight for her viewers. She will be a safe pair of hands and that's all that is required of her. She ain't no Abby Martin. Or Laurie Penny. Or Naomi Klein. Some will say she is eminently suited for the Breakfast audience, but I couldn't possibly comment.

My complaint is that TVNZ, once a public broadcaster in the real sense of the word, has become a vehicle directed by commercial objectives and a perceived deference to whoever its political masters happen to be at the time. It leads to a narrow range of political views and opinions that leave the neoliberal status quo unquestioned and unchallenged .

Hosking. Henry. Holt. Barry. The names are interchangeable. It doesn't matter who is hosting the shows and appearing on our television screens every weekday, the logic of the system remains intact.