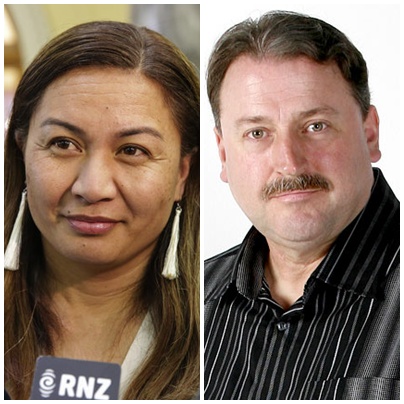 Green co-leader Marama Davidson thinks that commentator and blogger Chris Trotter should not be writing about the Christchurch terrorist attack. Instead he should 'shut up' and listen to more enlightened individuals - like herself.

You might also think she could also profit more on reflecting on her own contradictory politics rather than fretting about Trotter's politics. Like, how she claims to be on the side of the poor and powerless but still supports the neoliberal policies of the Labour-led Government. Or how she often likes to make a stand against colonialism but has had nothing to say about the efforts of the Trump administration to turn Venezuela into a client-state once again. Perhaps she could also reflect on how she says that we must take urgent action to fight climate change but supports the Labour-led government's disastrous policy to achieve carbon neutrality by 2050, even though the 2018 report from the Inter-Governmental Panel on Climate Change says we have no more than twelve years to tackle climate change otherwise we are toast.

None of this seems to be of concern to Davidson. Instead she's worried that Chris Trotter had the temerity to express his views on the Christchurch massacre on The Daily Blog. Davidson is quite entitled to disagree with the column. She could even write a reply. But Davidson's problem is that Trotter dared to actually write anything at all. According to the Green co-leader, Trotter should have left the punditry to more 'enlightened' individuals - like herself.

She tweeted: 'Chris Trotter is now trying to write responses to this horror. After having defended a platform for hate speech horror not too long ago. It was NEVER about the ability to debate them Chris. Sit back and listen and learn now please, turituri.'

Frankly I, like many, often struggle to work out what the hell Davidson is talking about. But given her arrogance and condescending attitude, she would no doubt say that's my problem, not hers.

Although I have clashed with Juliet Moses on several occasions over her defence of the Israeli government, I have sympathy for her view that Davidson 'just randomly picks a requisite number of words from her Woke thesaurus and tosses them into a word salad, hoping the intellectually superior progressives among us will nod sagely in agreement.'

But what we do know is that she continues to be annoyed that Trotter, like myself, chose to defend the right of the two alt right activists, Lauren Southern and Stefan Molyneux, to speak in New Zealand - although the gig was eventually cancelled. Both of us are diametrically opposed to their politics but, call us old fashioned if you like, we also subscribe to Voltaire's dictum of 'I might disagree with what you say but I defend your right to say it,'.

I also like to quote one of my heroes, Rosa Luxemburg, who observed that "Freedom is always and exclusively freedom for the one who thinks differently." She went on to say that we must defend the right to free speech 'Not because of any fanatical concept of “justice” but because all that is instructive, wholesome and purifying in political freedom depends on this essential characteristic, and its effectiveness vanishes when “freedom” becomes a special privilege.'

Of course, terrorism hates freedom. The Christchurch terrorist attack was also an attack on our religious and political freedom, freedom of expression, and tolerance. But here's Marama Davidson playing into the hands of the terrorist by actively trying to suppress views she doesn't agree with.

Davidson, and others who to subscribe to her politics, represents a pernicious brand of authoritarian liberalism that smears the left generally as dictatorial and intolerant. Thanks to people like Davidson, the right are already claiming that the left wants to use the terrorist attack to impose its own views. We on the left are being portrayed as little Joe Stalin's who have control issues. Thanks very much, Marama.

The point that Davidson completely misses is that the only way to protect free speech as an absolute right is to defend it everywhere. To a politician like Marama Davidson, I ask, where do you draw the line? Apparently she has drawn a line under the liberal views of Chris Trotter. He can hardly be defined as an enemy of progressive values. Indeed, unlike Davidson, he often criticises the neoliberalism of the Labour-led government and, also unlike Davidson, he has been a staunch defender of the democratically elected Venezuelan presidency of Nicholas Maduro.