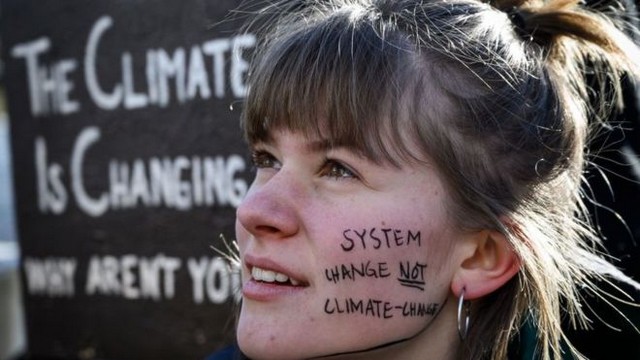 A new group is challenging Extinction Rebellion Aotearoa's failure to acknowledge that climate change cannot be effectively fought under capitalism.

WHILE EXTINCTION REBELLION Aotearoa has been able to focus the nation's attention on the issue of climate change for at least a short time, there have also been mixed messages coming from the fledgling movement. While XR Aotearoa is united in its view that urgent action is required to combat climate change and the Government's goal for the country to be carbon neutral by 2050 is a fatally inadequate response to climate change, it is unclear as to what, concretely, XR actually wants. The danger is that XR will become little more than a lobby group, demanding changes in government policy but without offering a new way forward.

While the demand for 'system change not climate change' is gaining ever greater traction overseas, XR Aotearoa is not campaigning on this platform, putting it at odds with many activists who say that climate change cannot be fought effectively under capitalism. They argue that an economic system that is based on ever more unsustainable growth and the further accumulation of profit is inherently opposed to the interests of the planet. It is a view that has been taken up by the campaign for the United States to adopt a Green New Deal and the topic of Naomi Klein's soon to be published new book, On Fire : The Burning Case for a Green New Deal.

In response to XR Aotearoa a new group is seeking to encourage the development of ' a broad anti-capitalist environmental movement'. In a press statement released over the weekend it states:

'Hopefully this Anti-Capitalist Green Front can be an alliance of groups and individuals united by a belief that capitalism is the core cause of the environmental crisis threatening us all. To these ends we are setting up the Aotearoa/ NZ Anti-Capitalist Green Front. We are initially testing the waters by putting up a Facebook page with a website to follow. Hopefully these will act as a gathering place for people and resources, with the aim being for people to set up their own local groups.'

It says that while it is encouraged by XR Aotearoa's success in getting people out on to the streets to protest, it also says that XR's demands ' will not be possible without abolishing capitalism, a system reliant on the total exploitation of nature."

The new group says that "We must take control of our energy and production systems to create a
new model of equality between peoples and harmony with nature."

It also says it is not in competition with XR but rather sees it as a "a parallel mobilisation that has a greater focus on the capitalist roots of climate catastrophe."

Of course only time will tell whether this new group will make ground but its formation is further evidence that there is a growing awareness that we cannot continue limiting the fight against climate change in order to appease the interests of capital. The group says that it does not accept 'that capitalists, or their parliamentarian representatives, will act in time to limit climate change in a meaningful way.'

In the Gisborne Herald, columnist Stuart Moriarty-Patten has also taken issue with the approach of XR Aotearoa. He writes:

"Extinction Rebellion Aotearoa NZ have been carrying out a number of acts this week to make people sit up and take notice of climate change, but their activists lack a real vision of what is needed if they are serious about halting the damage to our environment.

They are guilty of thinking that their demands can create an idyllic capitalism, managed by the state, that can end the destruction being caused to the Earth’s environment. They see their role as just needing to make enough noise to wake up political and business leaders."

He says that XR Aotearoa's failure to demand system change and not climate change means, by default, it ends up arguing that 'capitalism can be reformed to become a green system'. The  Green Party continues to advocate a so-called 'green capitalism'.

Moriarty-Patten observes: "Green capitalism presumes it will be enough to replace fossil fuels with renewables, whilst leaving the overall system intact. This scenario completely ignores the way capitalism operates and must operate."
Posted by Steven Cowan on Monday, April 29, 2019