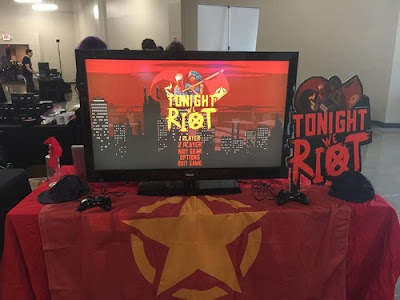 Described as a 'revolutionary game brawler' Tonight We Riot declares that 'those who do not move, do not notice their chains.' (Rosa Luxemburg).

HERE'S SOMETHING DIFFERENT. Tonight We Riot is an explicitly socialist and revolutionary game, a million miles different from the usual computer game fare.

In a country ruled by the capitalist elite the working class conclude that they have been conned by social democrats and their so-called 'incremental reforms'. Tossing aside appeals that they must support the 'lesser evil', the working class rise up and declare that there is a world to win.

Ted Anderson is part of Pixel Pushers Union 512, the co-operative behind the game. He told Variety magazine: "For one my own politics. I’m a socialist and I’ve never seen an unapologetically left-wing game ever and I played games my entire life. So I started thinking, what would be an interesting way to tackle that as a topic. So we bring it up in the game and we try and present it in what I feel are honest, earnest but still fun ways."

As this is a socialist game, the working class is the hero of Tonight We Riot.

"“There’s no singular face of the revolution, says Anderson .“The revolution for us is everybody working together in common cause and the liberation of each other. So that’s why there no one singular person who is in charge. The politics of the game are all about worker liberation and workers of all class and creed working together to create a new system where everyone is taken care of and basically shrugging off the control of the capitalist system.”

Tonight We Riot is scheduled for release by Nintendo this year.
Posted by Steven Cowan on Friday, June 07, 2019