OUR POLITICAL SYSTEM IS BROKEN 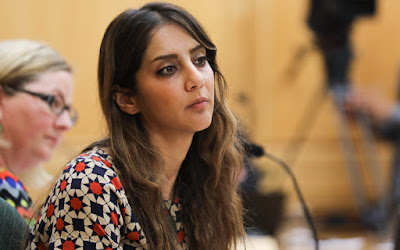 A recent example of our 'proud and strong democratic system' in action was the debate surrounding Budget 2019. Barely a squeak of opposition to this terrible neoliberal-driven budget was heard in Parliament. The only 'opposition' came from the National Party but that was an opposition based not on substance but on emphasis. National leader Simon Bridges criticising the Budget for 'welfarism' was, clearly, not a progressive viewpoint.

In another time we might of expected the Green Party to pitch the progressive view but that Green Party is dead and buried. Today's Green Party talks of 'profitability' and 'market interests'.

The real opposition came from outside Parliament through groups like Auckland Action Against Poverty, Organise Aotearoa, and events like The People's Budget Debate. Yet none of the views expressed outside Parliament made their way into Parliament. Ghahraman's 'proud and strong democratic system' has effectively excluded the views who don't think that neoliberalism is the next best thing after sliced bread.

Its a nice sentiment, and one which Ghahraman fondly believes, that voting matters and that our system of representative government is by the people and for the people. But this is delusional. And the nearly million New Zealanders who now choose not to vote know it is delusional. When they look at the decisions being made by Parliament they don't see their interests being represented. It is little wonder that so many people are disenchanted with Ghahraman's 'proud and strong democratic system'?

New Zealand has a democracy problem. Our representative system is broken because people have minimal influence over a political system that claims to represent their interests. It has become the preserve of political elites representing the interests of capital. When people voted for Jacinda Ardern and the Labour Party they expected change and 'transformation '. Instead they have ended up with more of the same. Ghahraman would have you to believe that is all part and parcel of our 'proud and strong democratic system' - a system that, of course, pays Ghahraman and her fellow parliamentarians a big, fat six figure salary (plus expenses).

Its no surprise that politicians like Ghahraman display little interest in reforming a system that has effectively disempowered people and instead continue with the charade that as 'responsible citizens' we must vote every three years, a process that has become little more than spectacle and emptied of any meaningful content whatsoever.