THE GREEN PARTY CLAMPS DOWN ON FREE SPEECH 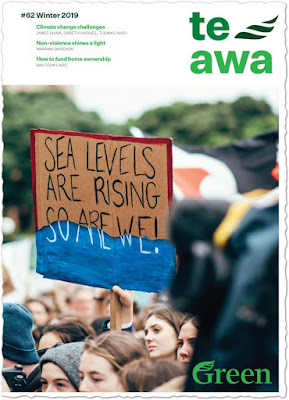 The attempt by the Green Party to suppress the views of one of its members only goes to highlight that this is an increasingly conservative Green Party with a leadership hostile to views that it doesn't agree with.

I IMAGINE that New Zealand Herald columnist Rachel Stewart will be observing the latest controversy within the Green Party with a certain sense of deja vu. You will recall that she was vehemently attacked for expressing her views on transgender rights with two Green MP's, Marama Davidson and Golriz Ghahraman, prominent among her critics. There was even a short-lived campaign to get her removed as a columnist for the newspaper.

Clearly no lessons have been learnt since then by Rachel's political opponents. They still believe they are entitled to tell people to shut up if they happen to disagree with them.

There is something disturbingly similar about the latest affair. On this occasion longtime Green Party member, Jill Abigail, finds herself under attack from the very same people who waged a long war against Rachel Stewart for her brazen audacity to publicly express views that they didn't agree with.

Te Awa is the in-house publication of the Green Party. Although it claims to be editorially independent, it still pulled down Abigail's article when members of the parliamentary Green Party came calling and has apologised for publishing it.  Green MP Chloe Swarbrick sits on its editorial board.

Apparently demonstrating a willingness to bow to political pressure has been the Te Awa editor. Despite being the magazine's editor, she seems reluctant to make any public comments.

All the NZ Herald will say is that 'editor declined to comment on Tuesday', omitting to mention that the editor is Shenagh Gleeson. She describes herself on her Facebook page as ' Deputy managing editor, chief reporter, regional editor at the New Zealand Herald.'

Abigail's crime was to express her views on transgender rights. I imagine she was aware of what had happened to Rachel Stewart and may of well of expected similar criticisms to be fired in her direction. And they have been.

Abigail reacted to Green MP's Jan Logan's comments in a previous issue of Te Awa that the Green Party was 'resisting' the 'backlash' against hard won transgender rights. She took exception to being pigeonholed as part of that right wing backlash when she actually agrees that transgender people are 'vulnerable' and that they can 'justly' claim their right to equal treatment.

She wrote: "I am a lesbian, supposedly under their umbrella, but I am part of the backlash."

The point of dispute is that Abigail has expressed her opposition to 'male-bodied trans women' entering 'female-only spaces'. That's her view and whether you agree with it or not, she has every right to express it. It is not good enough to simply dismiss her as 'transphobic' and a hate speech merchant, because she is obviously neither of these things.

She has told  RNZ that  'My article listed the facts of what has been happening in countries where new legislation to ensure trans gender rights have confused gender with biological sex and is resulting in the loss of women's rights, and free speech on the issue being completely shut down'

Political parties should be places where competing viewpoints and opinions can be critically and fairly discussed. Indeed it is a sign of its strength and good health that a political party encourages free and open debate within it. That the Green Party hierarchy have moved against Abigail underlines that the Green Party is weak and reactionary, scared of any dissent that may contradict the view of  the leadership. Its worth noting that former Green MP Sue Bradford recently highlighted the 'ruthlessness' that co-leader James Shaw has employed 'in dealing with internal opposition.'

But some more enlightened  Green Party members have come out in opposition to what amounts to political censorship and it was refreshing to see former Green Party leader Jill Fitzsimons expressing her 'surprise' that Abigail's article had been pulled down.

She told RNZ : "The Green Party always stood for frank and honest opinions, even if people don't agree with them.'

But it is a principle that the present Green Party leadership have clearly discarded.