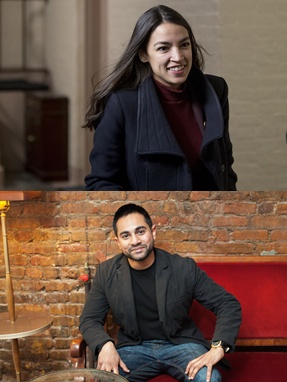 Alexandria Ocasio-Cortez has endorsed Bernie Sanders for President and found herself being criticised by the peddlers of identity politics for endorsing 'a white guy'.

ON SATURDAY Alexandria Ocasio-Cortez endorsed Bernie Sanders for President of the Union States, which immediately put her offside with a liberal cabal that downplays any notion of class politics in favour of the ideology of identity politics.

Bhaskar Sunkara of Jacobin magazine and the author of the recently published The Socialist Manifesto, has observed:

"Jane Eisner, a director at Columbia’s Journalism School, tweeted: “I find it fascinating that women of colour overlook female and minority candidates to endorse a white guy.” It was a more opaque version of MSNBC pundit Tisch Sussman opining in late September: “If you are still supporting Sanders as opposed to Warren, it’s kind of showing your sexism.”

Those remarks tell us a lot about politics in 2019, and the world that the professional class inhabits. Today, for many liberals, the idea of inherent conflict between those with power and wealth and those deprived of it – the language of class struggle – has been thoroughly rejected. In its place, we have a glib tribalism. “Women” (a majority of the world) and “women of colour” (a plurality of it) are said to have a common bond based on their identity. It doesn’t, apparently, matter whether you’re a female executive or you’re cleaning toilets at a corporate headquarters.