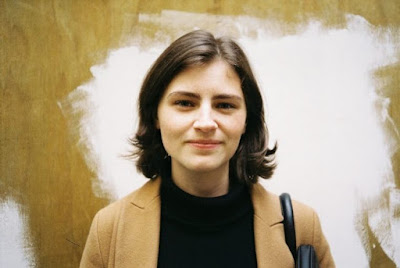 Chloe Swarbrick's casual parliamentary potshot fired at 'boomers' is the product of a Green Party loyal to market capitalism and that has abandoned any form of class politics in favour of neoliberal-friendly identity politics.

THE GREEN PARTY has abandoned any notion of class politics in favour of identity politics so it hardly comes as a surprise that Green MP Chloe Swarbrick should identify her elders, the so-called boomers born in the two decades after the Second World War, as the source of all her generation's problems. The term has been floating around the social media for at least the past year but, because she's a parliamentary politician, Swarbrick's casual insult - 'OK boomer' - has provoked widespread international media coverage and not all of it complimentary.

Swarbrick obviously hasn't enjoyed the attention, describing it as ' desperately bewildering'. But that conclusion may be the product of a dawning realisation that the struggling Green Party has just alienated yet another chunk of potential voting support.

On an annual salary of $160,000 (plus expenses) its hard to see how Swarbrick has been suffering under the heel of her 'boomer' oppressors. Her casual parliamentary insult not only reeks of smug, middle class conceit but stereotypes the older generation as greedy narcissists, sitting atop a big pile of assets and cash.

In 2015 research by Colmar Brunton revealed that more than forty percent of 50- to 70- year-olds were found to have little or no retirement savings and almost half face spending cuts to make ends meet in their retirement. Executive director Chris Vaughan said that while the perception of people born between 1946 and 1964 might be of a wealthy generation who planned to retire young, the company's survey had found otherwise.

The Green Party has been travelling rightwards for many years and has now arrived at a point that it demonstrates a politics that is comfortable and supportive of free market policies and ideology. So its not surprising that Swarbrick's glib generational analysis ignores the inconvenient economic reality of class.

According to Swarbrick, who has never expressed an interest in socialist politics, the fault is not capitalism or the politicians (like her) who represent its interests, but 'boomers'.

But, in the midst of a wildly incoherent defence of her 'OK boomer' ' insult, Swarbrick claims she's not a politician who is happy with 'business as usual'. She writes: 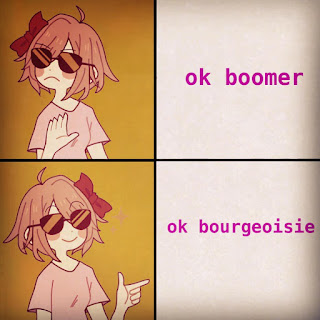 'Doing what we’ve always done will get us what we’ve always got. What we’ve got over the past few decades of governance, across the world, is an economic system that exploits both people and our planet. It just happens that the resulting devastating inequality and climate crises are only starting to be really and truly felt.'

'My “OK boomer” comment in parliament was off-the-cuff, albeit symbolic of the collective exhaustion of multiple generations set to inherit ever-amplifying problems in an ever-diminishing window of time. it was a response – as is par-for-course – to a barrage of heckling in a Parliamentary Chamber that at present turns far too many regular folks off from engaging in politics.'

So which is it? Are people disenchanted with the polices of neoliberalism that have been imposed on New Zealand by successive government's for the past three decades or are they merely upset with the parliamentary conduct of the politicians who implement and oversee those very same policies?Or is it both?

Whatever. Swarbrick isn't credible because, like her fellow Green MP's, she's done next to nothing to oppose the policies of an economic system that 'exploits both people and our planet'. She clearly agrees with her corporate-friendly co-leader James Shaw who once commented that “Our policy is what the Government's policy is. So now we're in Government, we need to do what Government policy says.”

Last week Chloe Swarbrick stood up with the rest of Parliament and applauded the passing of market-driven climate change legislation that targets 2050 as a likely date for final decarbonisation. This is in despite of being repeatedly told by the scientific community that we have less than twelve years to tackle climate change before the tipping point is reached and we go under.

The 'boomer' that Swarbrick speaks of grew up in a country that prospered in the post-war era. It might of been a particular historical moment in time but New Zealanders did enjoy a better life under economic policies that didn't pray at the altar of 'the market'. That all changed in 1984 with the election of the fourth Labour Government.

Its doubtful that we can ever entirely re-produce those economic policies but they can be a starting point for a fundamental rejection of the neoliberalism that has blighted this country for thirty years. Chloe Swarbrick would being doing us all a favour if she used her privileged political position to campaign and agitate for a new economy that works for the many, not the few. It would be a far more positive use of her time than taking parliamentary potshots at 'boomers'.