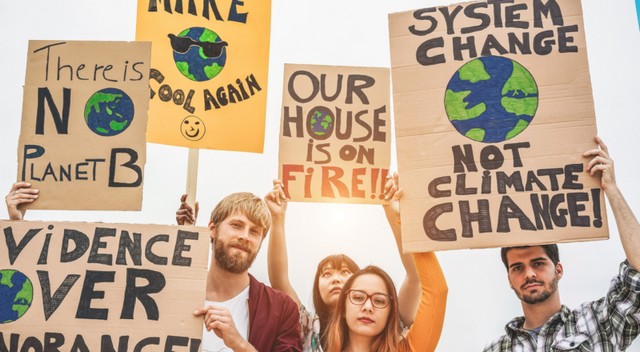 Prime Minister Jacinda Ardern claimed that climate change was her 'nuclear free moment'. But if Jacinda Ardern and Climate Change Minister James Shaw had been leading the protest flotilla heading for the French nuclear testing site at Moruroa Atoll, they would of decided that getting to Tahiti was good enough...

SO PRIME MINISTER Jacinda Ardern's 'nuclear free moment' is actually a neoliberal, market driven zero carbon act that proposes supposed carbon neutrality in 2050. It comes at a time when the scientific community is repeatedly warning us, in ever starker terms, that we have nothing like thirty years to effectively tackle climate change. So much for Climate Change minister James Shaw claiming he was 'listening' to the 170,000 folk who demonstrated in September, demanding urgent action on the climate crisis.

Despite ignoring the wishes of New Zealanders, the entire Parliament stood up and applauded the passing of this terrible legislation. It only went to underline how much our so-called 'representative democracy' has been captured by corporate interests.

"New Zealand will not be a slow follower," Ardern told Parliament, obviously regurgitating the soundbite cooked up for her by one of her functionaries.

Well, actually, Prime Minister, we already are a slow follower.

Leader Jeremy Corbyn recently told the Labour Party conference: “Labour now has the most ambitious net zero plans in the world. Conference agreed that these should be achieved through massive investment in infrastructure and skills, public ownership of key utilities and supporting climate transition in the global south.”

If Jacinda Ardern and James Shaw had been leading the protest flotilla heading for the French nuclear test site at Moruroa Atoll, they would have decided, on a consensus-decision making process basis naturally, that it was good enough just to get to Tahiti and stay there for a bit before heading back to New Zealand. That's the problem with centrist politicians; they always want to take the path of least resistance.

At the heart of the zero carbon legislation lies a denial that capitalism is responsible for the climate crisis we now are confronted with. Indeed in Parliament James Shaw blamed 'human activity' for climate change. This statement went unchallenged from a Parliament where the only opposition to neoliberalism is from politicians who want even more neoliberalism.

But Shaw attempting to shift the blame for the climate crisis from capitalism to, well, us, simply tries to mask the reality that capitalism as a system is highly exploitative of both people and planet. It is driven by a desperate need for profit and accumulation. As our news feeds remind us on a daily basis, to keep the wheels of capitalism well-oiled takes precedence even against a backdrop of fires, floods, hurricanes and general environmental degradation.

The zero carbon legislation serves  to obscure the inherently anti-ecological character of capitalism. A system that concentrates political and economic power in the hands of those who pursue the accumulation of capital without restraint is going to continue to demand expansion and growth.

James Shaw is fond of talking about what is 'pragmatic' and 'realistic', but its based on a free market fantasy. We should be talking about what’s really real: the need, for the sake of the planet, to dismantle the system that encourages profiting from fossil fuel extraction. We need our own Green New Deal.

One of the high priests of neoliberalism, Finance Minister Grant Robertson, has described the zero carbon act  as 'historic'. He's right. In protecting the interests of capital, it represents a historic betrayal of our children and of our environment.