I FOUGHT JEFF BEZOS, AND I WON 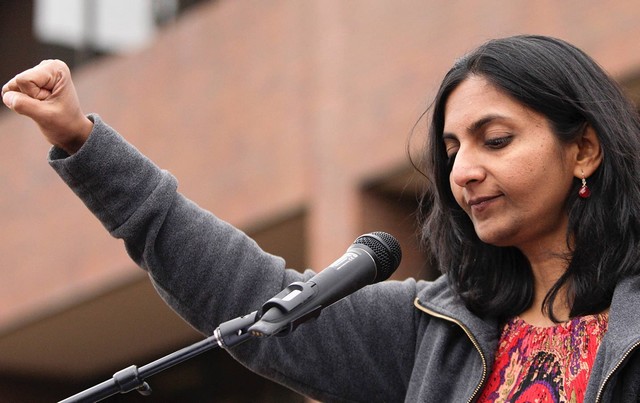 Despite a big money campaign mounted by tech giant Amazon intended to topple her, socialist Kshama Sawant has been re-elected to the Seattle City Council. While Amazon and Jeff Bezos might of had considerably more money to funnel into the election campaign of their candidate, they were outsmarted by an energetic and comprehensive  grassroots campaign. 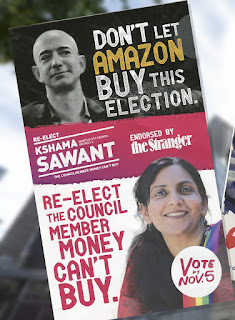 IN WHAT WAS BOTH A REMARKABLE and inspiring victory, socialist Kshama Sawant has been re-elected to the Seattle City Council. She defeated the corporate backed Egan Orion, whose biggest campaign contributor was tech giant Amazon. It ploughed approximately $1.5 million into the city council election through a political action committee sponsored by the Seattle Metropolitan Chamber of Commerce.

Sawant, a member of Socialist Alternative, was elected six years ago as the first socialist on the Seattle council in almost 100 years. On the night, Sawant's chances of being re-elected appeared to be vanishing. She trailed Orion by 8 percent and he was already beginning to talk as if he had won. However as the postal vote continued to be counted Sawant surged ahead. As it stands she is now some 1500 votes ahead of Orion and out of reach.

Amazon is not known for being a good corporate citizen (is there such a thing?) and it went after Sawant for championing what has become popularly known as 'the Amazon tax'. In 2018 she proposed the introduction of a $275-per-employee “head tax” on corporations making over $20m a year. The tax was intended to fund new and desperately needed public housing and homeless services. Seattle has the third-highest homeless population in the US, behind only New York and Los Angeles.

The tax was initially approved by the Seattle City Council but it quickly backtracked when Amazon threatened to withdraw business operations - and jobs - from Seattle. Egan Orion told the media at the time: 'Kshama Sawant is the worst partner for our large businesses. You know, a bologna sandwich would be a better partner.’

But despite throwing a large amount of cash about, Amazon has failed to topple the woman who they regard as a perennial thorn in its corporate side. Sawant had nothing like the campaign funds that Amazon provided for Orion. She instead relied on some 1000 dedicated volunteers who went out into the community and knocked on 200,000 doors. It was a grassroots campaign that outmanoeuvred Amazon's substantial financial resources.

In her victory speech on Saturday Sawant said that she had won because the people stood up to 'the attempt to turn Seattle into a playground for the rich.’

'Working people, people of colour, young people came out in huge numbers to vote by overwhelming majorities for our socialist politics and against this attempted hostile corporate takeover.’

And in pointed message for Jeff Bezos and Amazon she said:

‘Our campaign was as close a referendum on the Amazon tax as possible. I look forward to working with this new, progressive council to pass a tax on Amazon and the biggest businesses ...this council has a responsibility to the working people who elected it.’