THE CLOCK IS TICKING... 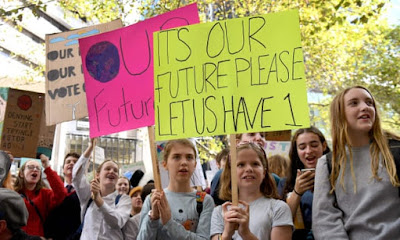 The Green Party's failure to oppose the big concessions made to big agriculture contained in the Zero Carbon Bill  have led  some Green Party members to accuse Climate Change Minister James Shaw of selling out and demanding that he step down as Green Party co-leader. But the surrender to the farming industry is a symptom of a much wider problem - the Government and the Green Party's failure to recognise that we are  well beyond the point when a supposed market-led solution can prevent the climate catastrophe that is staring us in the face.

THE RUMBLES OF discontent within the ranks of the Green Party membership crept up last week after the Labour-led Government unveiled a Zero Carbon Bill that not only continues to commit the country to supposed carbon neutrality by 2050 but has made vast concessions to big agriculture. Some Green Party members have accused their co-leader James Shaw - and Climate Change Minister - of selling out and have demanded that he step down as co-leader.

This, of course, isn't going to happen. But it would make no difference anyway because there is no one waiting in the parliamentary wings ready to take the Green Party on a fundamentally different political path. After years of travelling rightwards, this is a Green Party that has arrived at the point where all its MP's agree with Shaw's fatal commitment to a market-led transition to carbon neutrality.

The MP's are, as former Green MP Sue Bradford observed in August, 'blissfully unaware that younger people see the climate change clock ticking while they operate as if there is all the time in the world.' She also noted that Shaw has manoeuvred to neutralise internal opposition which has resulted in a situation where a 'Green left fraction within the party is tolerated but has little or no traction in the place where power is held, the parliamentary wing.'

Nevertheless Prime Minister Jacinda Ardern felt compelled to rush to the defence of her Climate Change Minister. She told Newstalk ZB's Mike Hosking last week that it would be wrong for Green Party members to blame Shaw for the Government's deal with farmers.

""I think it would be wrong to call for anything around James Shaw, he does an incredibly good job for New Zealand," she said.

After having already boasted that the deal was a 'historic agreement' between the Government and agriculture, it was a curious defence from Ardern. Was she suggesting that the Government had something to be sorry about? It certainly didn't appear that way when James Shaw stood up in Parliament and agreed with New Zealand First leader Winston Peters that 'it was indeed a fact' that, in Peters words, the Zero Carbon Bill represented 'a triumph of common sense and trust in responsible primary sector leadership.'

But the Government's big concessions to big agriculture is a symptom of a wider problem. We are well beyond the point when a market-led solution can prevent the climate catastrophe that is staring us in the face. We don't have anything like the time to politely transition to supposed carbon neutrality by 2050. The scientific community has been warning us of this repeatedly.

New Zealanders also recognise this otherwise there would of not been 170,000 good people demonstrating in September.  But despite James Shaw's claims that he 'understood' the concerns of New Zealanders, none of that 'understanding' has expressed itself in the Zero Carbon Bill.

The climate crisis is the existential crisis of our age and it is on the mind of more and more New Zealanders. Despite this, this guarded and centrist Green Party is struggling to hold on to just 5 percent of the total party vote and in a country where some 750,000 people no longer vote.

The Green Party is out of step with the mood of the country and, in Sue Bradford's words, 'more concerned about portraying an image of safe hands in suits than one of energy, rebellion, fresh thinking and action.'

But not only is the Green Party out of step domestically it is, increasingly, out of step internationally. There is a growing recognition that tinkering with individual policies is simply not enough. Real structural change is required.

This has resulted in a Green New Deal being proposed in the United States by people such as congress members Bernie Sanders and Alexandria Ocasio-Cortez. It rejects a market led transition to carbon neutrality as fundamentally flawed and proposes a major restructuring of the American economy.

In Britain a similar Green New Deal was agreed to by the Labour Party conference in September. Leader Jeremy Corbyn told the conference:

'...we have to go further. Other countries are already moving faster. Sweden has set a 2045 target. Finland has 2035. Norway has 2030 – currently the most ambitious in the world. Setting a tighter target like this will involve more dramatic changes to how anyone’s economy operates...if we don’t set a faster pace now, we will fall short of our moral obligations. Let’s keep up the pace. We have a world to save and win.'

Unfortunately you will not hear James Shaw, or fellow co-leader Marama Davidson, talking in such dynamic  terms. Such is the myopic vision of the Green Party that James Shaw's idea of 'real change' is 'announcing consultation on a framework for financial firms and major listed companies to assess their climate-related risks.'

The clock is ticking but, for James Shaw and the Green Party, it really is business as usual.