THE REVOLUTIONARY POLITICS OF MARAMA DAVIDSON 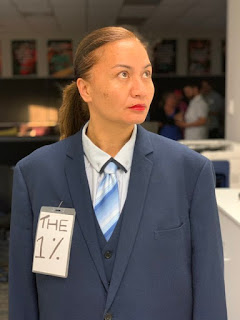 ISN'T IT GOOD to see Green co-leader Marama Davidson tweeting on the big issues? None of that tiresome stuff about climate change or poverty or inequality - even though she is the Green's spokesperson on welfare-related issues. Of course  if she started talking about those issues consistently and loudly, it might just upset her friends in the Labour-led government. Also, more folk might begin to notice inconsistencies like Davidson expressing her concern about the  increasingly widespread level of poverty but, at the same time, supporting the decision of the Government not to put up benefits.

So in recent times Davidson has been spending her time (she's working for us, folks) tweeting about other crucial issues. Like, she wants us to know that some children are writing their letters to Santa in te roe ( ( "Ka rawe! This is awesome.'). Maybe all these kids living in motels right now will be asking Santa for a proper home this Christmas, eh Marama?

However she did find time in her busy schedule to tweet about another significant issue impacting on all our lives - Tonga beating Australia in a rugby league game. Important stuff. There's nothing like a bit of 'bread and circuses' for the masses, after all.

The icing on the cake though is Marama posting a picture of herself in a suit and tie. It's supposed to be a Halloween satirical take on the one percent (It’s spooky season and I’m coming for your healthcare, education, clean water, wages and climate ?? (jks please ban billionaires)'). But given that this Green Party has done next to nothing to challenge corporate interests this could also be interpreted as Davidson applying for Observer Status to the next meeting of the One Percent Club. Apparently the members all think that Marama is 'a pleasure to work with.'