THE 'HELPING HAND' OF GRANT ROBERTSON 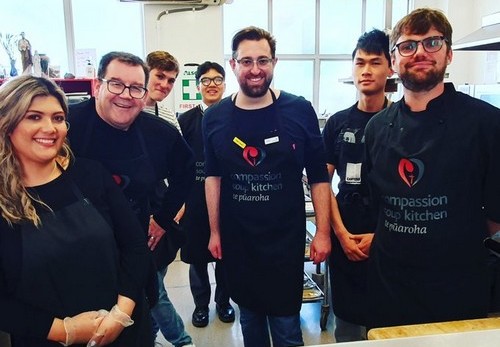 Finance Minister Grant Robertson pays a visit to the Sisters of Compassion soup kitchen in Wellington. They help some of the casualties of the Labour-led Government's neoliberal economic policies.

DESPITE PRIME MINISTER Jacinda Ardern claiming during her 2017 election campaign that tackling poverty would be one of the priorities of any government she led, New Zealand remains in the grip of a poverty crisis that is only getting tighter.

The evidence for that crisis are all too apparent. Food banks throughout the country are all struggling to cope, with the Auckland City Mission reporting a 44 percent increase in demand for food parcels over the past year. And this year we have  witnessed long queues of people assembling outside the Manurewa Work and Income office at two in the morning, desperate for financial help.

The Ministry of Health says that, according to its research, some 20 percent of New Zealand's children are now part of families that struggle to put food on the table everyday.

'The symptoms of poverty are reflected in soaring suicide rates for youth; in high rates of preventable third world diseases; in decaying teeth of young children; increasing and alarming debt levels especially to fringe lenders; homelessness and low quality, damp, cold and insecure rental housing and children who cannot learn because they are hungry and too often disturbed and anxious.'

This is happening at a time when the Labour-led government continues to maintain fiscally severe economic policies. Its austerity regime means that while the Government's own coffers might have swelled to some $7 billion, it has declined to spend any further money in areas such as welfare and health. This has resulted in it flatly rejecting such measures as increasing benefit levels. This was the recommendation of its own welfare working group which said earlier this year that benefits needed to be increased by as much as 47 percent in order to alleviate widespread economic distress.

The person overseeing the austerity regime is Finance Minister Grant Robertson, aided by his Assistant Finance Minister, Green co-leader James Shaw. He showed up last night at one of the community groups serving on the front line and who are dealing with the consequences of the neoliberal economic policies he directs.

Robertson praised the work of the Sisters of Compassion soup kitchen in Wellington. He tweeted:

" Good to catch up with folk I worked with/helped over the years+remember how important it is to give every helping hand we can.'

But that 'helping hand' apparently doesn't go as far as raising benefit levels.

Of course, the reason why soup kitchens exist is because the economic system that Robertson lauds consistently fails to meet the needs of the community. As Oscar Wilde noted over a century ago, charity does not cure the disease, it merely prolongs it. As Wilde observed 'the proper aim is to try and reconstruct society on such a basis that poverty will be impossible.'