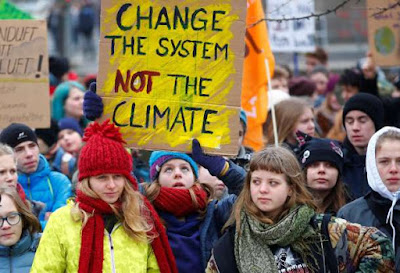 The Government has launched a education resource on climate change for primary and intermediate schools. But it avoids talking about the root causes of our climate crisis and instead invites the kids to support the government's  abysmal plan for carbon neutrality in 2050.

TO EFFECTIVELY TEACH CHILDREN about climate change it would only be logical to teach them about the economic system that is presently chewing up their planet. We would teach the kids that capitalism's insatiable appetite for ever more growth and ever more profit is wrecking their environment. Unfortunately the Labour-led Government, the protector of corporate interests, isn't going to let the kids hear any of this.

'''..explains the role science plays in understanding climate change, aids understanding of both the response to it and its impacts – globally, nationally and locally – and explores opportunities to contribute to reducing and adapting to its impact on everyday life.'

Of course children need to be provided with the tools for climate literacy and teaching the science of climate change is fundamental. But this doesn't go anywhere near explaining the real causes of climate change and providing realistic solutions.

Having already decided that the package won't include anything about the social and economic origins of the climate crisis, the children are being asked to believe that combating climate change is about making lifestyle changes, conservation, recycling and the like. Climate Change Minister James Shaw describes this as 'making a difference'.

At South New Brighton School in Christchurch where the resource was trialed in 2018, the children were encouraged to walk or bike to school. Some of the children even decided to become vegetarian. But the resource kit does not ask the kids to eventually become activists for the kind of social and economic change that is desperately needed in order to effectively tackle the climate crisis. That kind of activism has been substituted with the Labour-led government's objective of supposed carbon neutrality  by 2050 which, we've been warned by the scientific community, will be some twenty years too late.

I'm guessing that this educational resource package won't be explaining that its time for #systemchangenotclimatechange. I imagine it won't be even teaching the children about the Green New Deal being proposed in the United States and elsewhere.

There doesn't appear to be anything in this resource package that takes on board the urgency that  young people like Greta Thunberg are demanding. More worryingly still, it suggests to young people that capitalism is their friend rather than the very real threat it poses to their futures.  I imagine Greta would have something to say about this.
Posted by Steven Cowan on Sunday, January 12, 2020