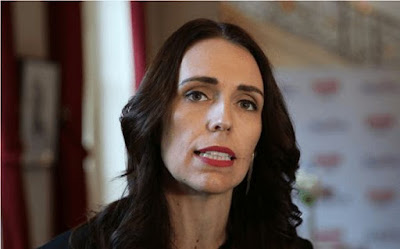 Jacinda Ardern's election plan to attenuate the positive can only be seen as a defence of the political and economic status quo. That's good news for the ruling elite but bad news for the rest of us...

JACINDA ARDERN'S declaration that she wants to see Labour run a positive election campaign is a declaration that Ardern wants to fight a campaign of style rather than substance. While she smiles for the cameras and provides 'feel good' sound bites for the media, her campaign team will be trying to sweep under the carpet all those things that would muddy Arden's positive message. Like growing poverty. And inequality. And homelessness. And its inadequate response to climate change. And pandering to corporate interests. Not to mention her government's continuation of austerity-led policies.

We got a taste of the cuddly campaign that Arden and Labour want to run with the appearance of her child at the Ratana commemoration. But beyond that obvious moment of electoral cynicism, at the root of it all is Arden's commitment to centrist managerialism. While she claimed during the 2017 election campaign that any government she led would be one of transformation, she has done little but further entrench the interests of the ruling class.

Jacinda Ardern may want to fight an election campaign of sunbeams and good vibrations, but people actually want more than politics that stops at virtue signalling identity politics. The stark fact that some three quarter of a million people no longer vote indicates that a lot of us want a helluva more than promises about keeping the status quo ticking over nicely. We simply don't believe the arguments of Labour Party cheerleaders that she's 'preferable' to Simon Bridges or that she 'deserves' a second term.

I mention too, for entertainment value, Martyn Bradbury's imaginative defence of his ex-babysitter. According to the editor of The Daily Blog, an intransigent public service is trying to stop Jacinda Ardern doing anything progressive. That's right, folks - its the public service that stopped her introducing a capital gains tax and has stopped her raising core benefits. I think Bradbury has been watching too many old episodes of Yes, Minister.

But Martyn Bradbury is just part of that large slice of the left  that has hitched its wagons to the electoral fortunes of the Labour Party for the past three decades. So we are, criminally, no further ahead in providing political representation for the growing number of folk who want an alternative to the neoliberal consensus and who desire real change and not a mere tinkering with the levers and dials of the machine.

New Zealand mainstream politics, never particularly challenging at the best of times, has become marooned in a centrist swamp. I cast a jaundiced eye over the New Zealand political landscape and I see nothing (and I do mean, nothing) to inspire or excite. I don't see any politician offering a vision of the future that isn't constrained by the interests of 'the market'. But I do see plenty of politicians continuing to cling on to their bland, centrist model of governance and their defence of an economic system that has enriched the few at the expense of the many.

Justine Sachs of Organise Aotearoa recently tweeted: 'I truly wish we had a 1/100th of the movement against neoliberalism and austerity that the US has currently.'

I know what she means. Thanks to the surge of interest in socialist politics and the rise of groups like the Democratic Socialists of America and politicians like Bernie Sanders and Alexandria Ocasio-Cortez, there is a real fight back against neoliberalism. Among young people in America, socialism is now more popular than capitalism.

This election we're again going to  being offered nothing than variations on the same centrist theme. But centrism won't fix the growing level of poverty and inequality and it won't fix climate change. In 2017 Jacinda Ardern said that these would be the two main policy concerns of any government she led. In 2020 she wants to us to link arms and sing 'Kumbaya.'