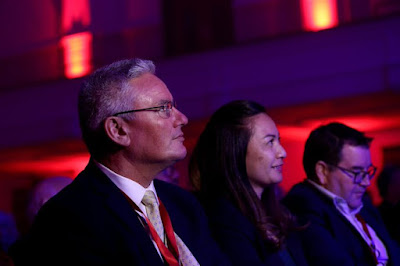 In her 'State of the Planet' speech Green co-leader Marama Davidson says that climate change and inequality are 'deliberately perpetuated to benefit a few at the expense of the many, and at the cost of our planet.' If that's the case why are the Green Party continuing to support the market-driven policies of the Labour-led government? Why aren't the Green Party not putting forward the case for a Green New Deal?  Or is Marama Davidson just saying what she thinks her supporters want her to say?

FOR THREE YEARS THE GREEN PARTY has loyally supported a Labour-led Government that has continued with the policies of austerity and neoliberalism and that has seen poverty deepen and inequality increase. There's barely been a squeak out of a Green Party that hasn't even attempted to hold the Government to account in Parliament. It decided that it preferred not to risk embarrassing Jacinda Ardern and co in public and obligingly handed over its allocation of questions to the National Party. Apparently parliamentary realpolitik has come first to actually representing the interests of the very people who put the Green's into office in the first place.

When the government's own welfare working group recommended over forty changes to the welfare system, the government rejected all but three. That included rejecting a recommendation to immediately increase core benefit levels to 'alleviate social distress'. RNZ's Tim Watkin was disconcerted how easily the Green's fell in behind the government:

'Welfare Minister Carmel Sepuloni agrees the welfare system is not working. Marama Davidson agrees the welfare system is not working. And then they commit to ignore the report's big recommendations. They say no to up to 47 percent benefit increases, preferring "a staged implementation". The call for "urgent change" is rejected. Remarkably, Ms Davidson has put her quotes into the same press release, tying the Greens to this approach, when they could have been dissenting from the rafters.'

But Tim Watkin should not of been surprised by Davidson's meek surrender. Barely a year earlier she stood up in Parliament and praised the Finance Minister's first budget, describing it as the budget of 'a real government'. That wasn't the view of RNZ's Guyon Espiner who rather more accurately described Grant Robertson's  budget as 'a triumph of neoliberalism or at least a continuation of it'. Former Green MP Sue Bradford observed that Robertson seemed determined to 'out-do Bill English's fiscal conservatism'.

But  it must be an election year because suddenly the woman who praised Grant Robertson's budget is arguing that climate change and inequality are 'deliberately perpetuated to benefit a few at the expense of the many, and at the cost of our planet.' And she goes on to say that climate change has been 'accelerated due to an unfounded belief that the very market which benefits from this will fix it.' 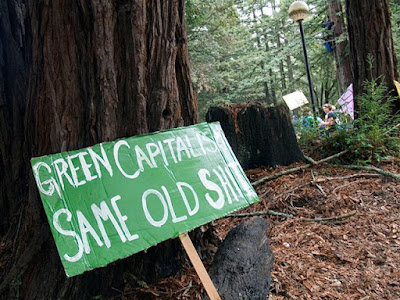 Has Davidson suddenly been converted to the ecosocialist cause or is she  cynically pitching her case to those Green voters presently disillusioned with the Green Party's centrist politics? Given the apparent ease that Davidson can serenely adopt entirely contradictory positions, the evidence suggests the latter.

Even though she claims to be of the view that climate change has been accelerated by 'the market' she is the co-leader of a party that continues to insist that the very capitalist machine that is eating up the planet can be employed to save us from the climate crisis it created in the first place. This is a Green Party whose leadership has been dismissive of any suggestions it should propose a Green New Deal for New Zealand. That, of course, would mean rejecting the neoliberal model it currently supports.

Despite her supposedly anti-market views, there is no acknowledgement of ecosocialism in her speech. There's certainly no call for system change. And, given that the working class will be the  main actor in any movement for real change, Davidson's speech is devoid of any class analysis. Having seemingly dismissed the working class, she instead talks vaguely of 'collective caring' building a 'better world'. Which could mean just about anything.

Despite all the huffin' and puffin' by Marama Davidson, there's nothing in this speech to suggest that the Green Party would not behave in exactly in the same way it has done for the past two years  and play the tame poodle to a Labour government pursuing neoliberal policies. The role of Marama Davidson still seems to about providing some 'progressive' ideological cover for a centrist and corporate-friendly Green Party. But Davidson's dismal track record over the course of the past two years means she's going to have problems convincing anyone but her hardcore supporters that she's anything more than a routinely centrist politician who has more in common with the Labour-led government than she is prepared to admit.