SINEAD GILL : SICK OF THE POLITICS OF CENTRISM 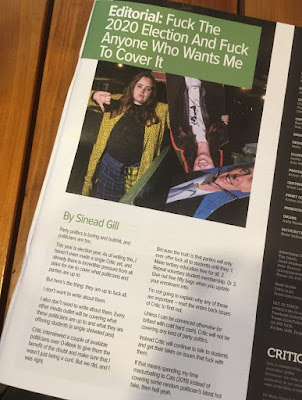 The editor of Critic has expressed her dissatisfaction with the political establishment...

THE EDITOR of the University of Otago's student newspaper has taken a little bit of establishment heat for an editorial she has written expressing her dissatisfaction with what pretends to be our 'representative democracy'.

Critic editor Sinead Gill gets straight to the point:

'Party politics is boring and bullshit, and politicians are too.

This year is election year. As of writing this, I haven't even made a single Critic and already there is incredible pressure from all sides to cover what politicians and parties are up to.

But here's the thing : they are up to fuck all.

I don't want to write about them.'

This is not a view that has received a favourable response from one of the very politicians that Gill has attacked. MP for Dunedin South, Clare Curran, has tweeted:

'Sad & tbh small-minded to think that all uni students care about is fees. Has she heard about climate change or mental health? Or does she just exist in an ego-centric bubble? Happy to debate her any day.'

Gill  has tweeted in reply: 'If @clarecurranmp actually read the editorial, you would see I'm still covering issues, just not wasting my time on parties and point-scoring-orientated politicians.'

'It's not so much cynicism and walking away from politics, but rather a call for a different type of politics,' Nissen said.

The study comments: 'In some cases, students doubted the extent to which they could affect political change through formal politics. These students described feeling 'disempowered', 'excluded' or 'disconnected' from what went on in Parliament.'

Clare Curran, a  loyal representative of the political establishment, completely misses the point being made by Gill. What she is expressing is a general disenchantment among her peers with mainstream politics and not the issues themselves. Indeed she makes the point that while Critic may not be covering party politics it will be seeking out the views of students on the issues that concern them. Presumably climate change and mental health will be among those issues.

The disenchantment of youth with the present centrist politics can only have been intensified watching Jacinda Ardern and her Labour-led government leaning into the status quo after campaigning on a platform of 'transformation' in 2017. The tragedy is that we lack a  progressive political party that can give voice to the obvious widespread dissatisfaction with the status quo.