THE LABOUR-ALIGNED LEFT : DEVOID OF IDEAS AND VISION 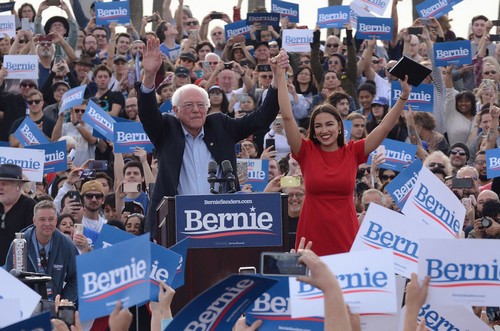 While Bernie Sanders and Alexandria Ocasio-Cortez  talk of a political revolution the Labour-aligned left in New Zealand talks of voting for Jacinda Ardern and Labour because they aren't Simon Bridges and National. Inspired yet?

THE DEMOCRATIC PRIMARIES have the Democratic Party at a historic crossroad and the decisions it makes over the next several months will have consequences around the world. In the end, it will have to choose a presidential candidate that can defeat Donald Trump or choose a candidate who will hand Trump another four years in the White House. Its either the left wing Bernie Sanders or the corporate candidate the Democratic National Committee and its corporate backers think they can impose on the party. Right now, that looks like it will be either Peter Buttigieg or Mike Bloomberg. Joe Biden already looks like he's a goner.

The American left mostly recognises that its crucial to back Bernie Sanders. Once regarded as merely an anachronistic sideshow on the fringes of American politics, the U.S. left has grown exponentially in recent years. Young Americans especially, confronted by issues such as economic inequality and an impending ecological collapse, have little belief in capitalism. The polls are consistently showing that young Americans favour socialism over capitalism. That's quite a turnaround in a country where, historically, the political establishment has strenuously tried to stamp out the socialist project and the ideas and values that flow from it.

But Bernie Sanders declaration of 'a political revolution, where millions of people get involved in the political process and reclaim our democracy,' has been a rallying call for millions of Americans and a thorough rejection of Democratic centrism which has tried to conceal  the conflict between those with power and wealth and those deprived of it and, with it, the language of class struggle. The 'Third way' politics of Clinton and Obama has been little more than an accommodation with neoliberalism.

At a recent rally Alexandria Ocasio-Cortez said :  'We have to nominate somebody with a political revolution at their back. It is not going to be any one candidate that defeats Donald Trump—it will be a movement.'

Bernie Sanders has clear objectives and a unifying theory of change. And whenever Sanders calls it quits, after his eight years in the Oval Office maybe, the equally popular AOC is well positioned to be his successor.

The political struggle that is occurring in the United States is in stark contrast to what is unfolding in New Zealand which is..very little. Despite the fact that New Zealand is also a country marked by increasing inequality and division and a sorely inadequate policy response to the climate crisis, we are merely stumbling to a general election where we will be asked - again- what brand of neoliberalism we want. Some 700,000 folk, including me,  will choose not to choose and not vote.

Where is the political voice for the increasing number of people who feel that they are not been listened to and whose interests are not being defended?  A vibrant and active left would be seeking to represent this groundswell of dissatisfaction and the mood for change.

But  there's no call for a political revolution in this country. The best that the Labour-aligned left can come up with is a pathetic appeal for folk to vote for Jacida Ardern and Labour because they aren't Simon Bridges and National. Apparently we're supposed to be excited about another three years of Ardern's centrist politics.  There's no talk of socialism, no talk of prioritising the interests of the working class and there's no new and bold ideas like Alexandria Ocasio-Cortez's Green New Deal. The Labour-aligned left is a ghost town, devoid of ideas and vision.  After over three decades of neoliberalism, how long are we prepared to allow this situation to carry on?