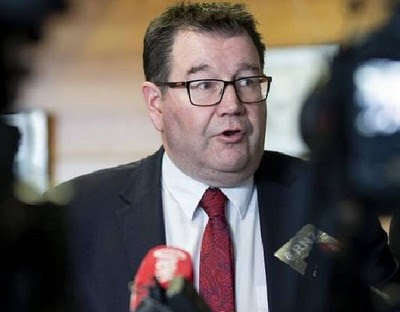 The high priests of the free market, MIlton Friedman and Friedrich Hayek, were supporters of the Universal Basic Income (UBI). Thy saw it as a way of cutting costs, with people being provided with the bare minimum to live on while welfare programmes were dismantled and swept away. So why is the Minister of Finance Grant Robertson considering an UBI and why are some on the left encouraging him to implement it? Perhaps the real alternative is the Universal Basic Services (UBS).

THE FACT THAT Finance Minister Grant Robertson has not ruled out a Universal Basic Income (UBI) as a way to combat the impact of the looming recession - looking - awfully - like - a depression, has encouraged its proponents to press for its introduction. This time, they think, they really do have a chance of getting the job done.

One of the main proponents of the UBI has been UK economist Guy Standing and someone Robertson has referenced in the past. Standing was also one of the keynote speakers at Labours Future of Work conference in 2016.

Its been dismissed by National leader Simon Bridges, arguing that financial support should be provided through wage subsidies and the present benefit system. He has also expressed concern that the UBI, if introduced, would become a permanent feature of New Zealand life.

Supporting Bridges has been the right wing radio host Mike Hosking. He's tubthumped that 'A universal basic income is a socialist's dream. It's about control by the state, it's about everyone being reliant on the government.'

But Robertson's positive comments that the UBI was 'on the table' because 'we're obviously going to be in a situation where a large number of people are going to be relying on income support from the state for an extended period,' has been music to the ears to those who see it as a progressive step forward.

Commentator Chris Trotter has conjured up the ghost of Mickey Savage in his social democratic pitch for the UBI declaring that the 'disaster of the Great Depression was transformed into a new and fairer society by the democratic socialism of the First Labour Government.' He views the coronavirus- provoked recession as an opportunity for the Labour-led government to usher in such a new era of 'transformation' via the UBI:

'The present crisis demands a bold measure to both reassure and economically support an anxious nation. She has the power to meet the people’s need – and she must use it. If calling the reform UBI is a problem, then for God’s sake call it something else! But get it in place, Jacinda.'

Putting aside the obvious fact that Trotter continues to be mistaken about the potentially progressive character of this government, its an exaggeration to say that the introduction of a UBI would represent a victory for 'disaster socialism' or at least represent a big step in its direction (Trotter borrows from writer and activist Naomi Klein here but very selectively).

Appearances can be deceiving. The UBI is designed not to topple capitalism but, on the contrary, its an attempt to protect capitalism from the forces of change. This is one of the very reasons that a conservative politician like Grant Robertson is prepared to consider it and why arch capitalists like Richard Branson, Mark Zuckerberg and Eion Musk support it. Corporate Democrat Hillary Clinton writes in her memoirs What Happened that the UBI for all Americans 'fascinates' her.

Chris Trotter himself acknowledges the potential of the UBI to defuse any demand for substantial structural change and - who knows - maybe that's why he is an advocate for it. He's not exactly been one of socialism's great supporters over the years. He writes:

'Every capitalist with a brain knows this. They know that impoverished consumers must put at risk the entire capitalist system. That’s why they, too, however reluctantly, are coming to the conclusion that the introduction of some sort of UBI is inevitable.'

'UBI is advocated by many neoliberal economic strategists as a way of replacing the ‘welfare state’ of free health, education and decent pensions with a basic income. And it is being proposed to keep wages down for those in work. Any decent level of basic income would be just too costly for capitalism to afford. And even if UBI were won by workers in struggle, it would still not solve the issue of who owns the robots and the means of production in general.'

Journalist and academic Max Rashbrooke has also questioned the ability of capitalism to pay for a UBI. He has suggested that substantially increasing benefits is the most appropriate policy mechanism, arguing that a benefit increase is all about  'radically reducing poverty and transforming the lives of the most vulnerable' and that '...it's a smart way to lift people's spending power and stimulate the economy.'

Capitalism could pay for a basic level of UBI that would allow people to lead decent lives, but only by defunding something else. As one commentator has put it 'an affordable UBI is inadequate, and an adequate UBI is unaffordable.'

Indeed to sustain even an adequate UBI would require an exit from capitalism anyway and so render the idea that the UBI represents a means of 'transformation' as ludicrous. Only an UBI affordable to capitalism would have any prospect of being introduced, leaving people's basic needs still unmet.

And while increasing benefits may provide some immediate financial relief for beneficiaries, they will still be confronted with major problems in areas such as housing and health. The economic and political status quo, again, remains unchallenged by just a benefit increase.

The alternative is the introduction of Universal Basic Services (UBS). This is the idea that everyone’s basic requirements – food, shelter, public transport and access to the internet – should be completely free. Where the  UBI provides a regular cash sum to every individual, the UBS provides universal, free access to services from health to education, from housing to transport.

The UBS points to an expanding inclusive society and the contraction of the role that capitalism plays. it suggests that to flourish as a society we must prioritise the common good. In practical terms, that means more and better collectively provided services. It means an expansion of the public sector. Everyone has access according to need, not ability to pay. This way we resurrect the idea of the common good that has been buried under the muck of neoliberalism for the past three decades.

It is possible. Indeed UK Labour was in favour of a UBS before the last UK election, recognising that a flourishing and prosperous society that works for all, not just a privileged few, requires a foundation of universally accessible goods and services.

'A more exciting alternative, in my view, is the idea of Universal Basic Services i.e. what are called public goods and services, free at the point of use. A super-abundant society is by definition one where our needs are met without toil and exploitation ie a socialist society. But the transition to such a society can start with devoting socially necessary labour to the production of basic social needs like education, health, housing, transport and basic foodstuffs and equipment.'

The UBS is about providing a non-market solution to the economic distress that  a growing number of people are facing and it could be part of a Green New Deal. But we  cannot continue to look to Labour or the Greens's to provide us with the kind of economic and social transformation we are seeking. Going cap in hand to the Labour-led government for a UBI simply helps to  confine the political argument to a familiar road that goes exactly nowhere. We can do so much better than this if we have the political will.