WHILE PEOPLE GO HUNGRY, THE GREEN PARTY WORRIES ABOUT BOREDOM

While Green co-leader James Shaw worries about people getting bored in their 'bubble', many folk are worrying about putting food on the table...

THE DESPERATION BEING expressed on social media is almost palpable. Many people are reporting that they are going hungry because they are unable to contact Work and Income to obtain either a food grant or a one-off emergency grant. While some may able to turn to friends and family for support, many can't. And with the Government stressing the importance of people remaining 'self-isolated ' getting any help this way can be problematic at best. It simply isn't an option.

Work and Income stopped doing face to face interviews on Monday and has been directing people to its call centre. But waiting times have been excessive and many people are reporting that simply cannot get in contact with Work and Income. In stark contrast it appears that the Ministry for Social Development isn't having any difficulties processing wage subsidy applications from employers.

Staggeringly, Work and Income have withdrawn the online option of applying for extra  costs such as a food grant. But employers can still apply for a wage subsidy online.

There are fears that as the job losses mount, many folk will find themselves without any form of income while they struggle to apply for the unemployment benefit. 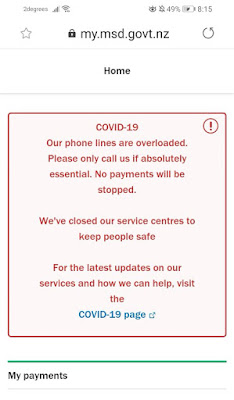 In order to provide some financial relief, the Government, as a matter of urgency, needs to increase the main benefits to a level that makes applying for a food or emergency grant unnecessary. Last year the Government's own welfare working group recommended that the core benefits be increased by a minimum of $70. As part of its $12 billion 'business continuance' package, the Government increased the Jobseeker benefit by $25. This was never going to be enough and so it has proved.

The Green Party, even in a time of crisis, continues to play the role of loyal servant to the Labour-led government. The Green's ineffective welfare spokesperson, co-leader Marama Davidson, has done what she usually does...next to nothing. One of her most recent tweets praises the Government, commenting that 'Our Government have announced positive supports, whether you’re someone who rents, works casually, or own a small business.'

Almost as an aside, she also comments ' We know there may be some of our whanau that are feeling like they aren't getting the help they need. Please let us know if this is the case for you.' Yes, lets keep these problems out of the public spotlight. We don't want to risk to embarrassing the Government, do we?

Meanwhile, fellow Green co-leader James Shaw has bigger fish to fry. He's concerned that people are getting bored. On Twitter Shaw has advised that, since its the weekend, people 'should relax and do some fun things' like 'going for a local walk' or doing an 'an online yoga / exercise class.' James Shaw needs to be reminded, frequently, that many folk have bigger problems to worry about than boredom. Like trying to put food on the table, for instance.