LESSER EVILISM IN THE TIME OF CORONAVIRUS 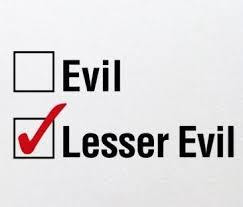 With Labour already indicating there will be further austerity to pay for the present crisis, is the Labour-aligned left still going to continue to defend Labour as the 'lesser evil'?

FOR THREE long decades the Labour-aligned left has accommodated itself to every neoliberal outrage promoted, defended and perpetuated by Labour by claiming that its preferable to exactly the same outrages being pursued by the other lot. While the Labour-left might be critical of the Labour Party in between elections, and sometimes quite harshly, in an election year it remembers what its real role is and docilely falls into line. Its mantra becomes 'See No Evil, Speak No Evil, Hear No Evil, Lesser Evil'.

As result more and more folk no longer bother to vote because it doesn't matter who we vote for, nothing ever changes. I actually haven't voted for a number of general elections now. But even now the Labour Party and its apologists still don't get it. They think they've got problems getting us to show up at the polling booths because we're annoyingly 'apathetic' and/or we don't take our 'civic responsibilities ' seriously enough. Or we're all inhabitants of the sleepy village of Hobbiton, to quote blogger Martyn Bradbury, the country's most sycophantic Jacinda Ardern supporter.

The upcoming general election presents the exponents of lesser evilism with even more difficulties. With both the main parties already indicating that we're in for another good dose of austerity in order to pay for the present crisis, how can the Labour left continue to justify its support for Labour? Its effectively asking people to vote against their best interests and vote for further economic hardship. That's because we know, if history is any guide, that it won't be the business sector that will be asked to carry the economic burden.

Is the Labour-aligned left seriously going to argue that it would be somehow worse under a National-led government? Given that the first term of this Labour-led government has seen poverty and inequality actually increase, that's going to be a particularly hard argument to defend and likely to convince no one. You will have to be very stupid indeed to claim that Labour 'deserves a second chance' or that Jacinda Ardern is really a progressive politician in disguise (gosh, she's had me fooled).

But defending Labour as the 'lesser evil' will only stymie attempts to build a real opposition to the policies of neoliberalism, just as it has it done for the past three decades. At this dangerous time there is no 'lesser evil', just different threats. For the Labour-aligned left to argue that we should vote for one those threats in September is simply unacceptable and one that can only lead to further working class defeats.

In the end, we need a new mass party to represent and defend the interests of the 99 percent. We're needed such a party for decades and, perhaps more so at any other time, we 're desperately in need of such a party now. That no such party exists is a direct result of those who have worked against the formation of such a party and  continued to preach that Labour is the 'lesser evil'. But that 'lesser evilism' is only going to lead to further evil in the shape of more austerity.
Posted by Steven Cowan on Monday, April 06, 2020