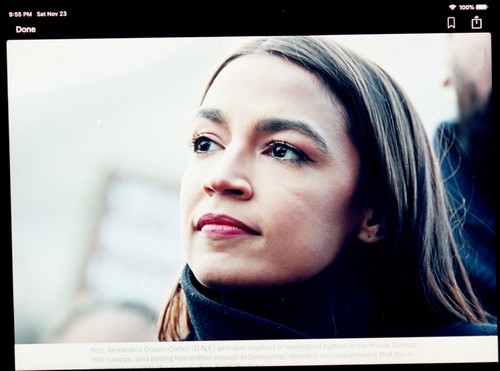 Highlighting growing support for the American left, soclalist congresswoman Alexandria Ocasio-Cortez  has swept to victory in her New York congressional district. She will joined in Congress by fellow socialist Jamaal Bowman. He ousted 16-term Eliot Engel who was backed by corporate Democrats including Nancy Pelosi and Hillary Clinton.

CORPORATE INTERESTS SPENT millions trying to prevent socialist congresswoman Alexandria Ocasio -Cortez from retaining her New York congressional district, but to no avail. Disproving the corporate media claim that 'Alexandria Ocasio-Cortez's revolution is over', she romped to victory with over seventy percent of the vote.

AOC's corporate-backed rival was Michelle Caruso-Cabrera, a former CNBC international correspondent. She was funded by, among others, Blackstone CEO Stephen Schwarzman, Goldman Sachs CEO David Solomon, and several billionaires. But despite the corporate backing she raised  just 20 percent of the campaign money raised by Ocasio-Cortez. She raised just over $2 million, while AOC secured over $10.5 million in donations during the campaign.

As well, Caruso-Carera was unable to compete with AOC's well-organised grassroots campaign.

AOC tweeted: 'Wall Street CEOs, from Goldman Sachs to Blackstone, poured in millions to defeat our grassroots campaign tonight. But their money couldn't buy a movement.'

'There is no price tag for having people who are animated by the courage of their convictions and by a desire for a better world. You cannot purchase that. Wall Street just decided to put in millions of dollars in dark money [at the] last minute in this race . If people hadn't volunteered, organised, and phonebanked for me it might have meant something.'

In another significant win for the socialist left, Jamaal Bowman defeated 16-term Democratic Representative Eliot Engel in a neighbouring 16th congressional district in the Bronx. Engel was known as being one of the more hawkish Democrats. Chairrman of the powerful House Foreign Relations Committee, he voted for the Iraq War and voted against the Iranian nuclear deal. He received substantial donations from weapons manufacturers such as Boeing and Lockheed Martin.

With support for Engel waning, Speaker Nancy Pelosi came out in support of him, citing his 'extraordinary progressive record of service to New York and the nation.'

Bowman had the support of a broad range of progressive organisations including the New York section of the Democratic Socialists of America, of which he is a member.

Last year Jamaal Bowman told Jacobin magazine : 'There’s some stigma associated with the word 'socialism' even though the current capitalist model we have isn’t working for the majority of Americans. We have a system where we have three Americans that own more wealth than the bottom 50 percent of the country. We have 40 million people living in poverty. We have 15.5 million children living in poverty. What we have now is not working for the masses. If you want to call me a socialist then call me a socialist.'

After the announcement of his victory Bowman tweeted : 'I’m a Black man raised by a single mother in a housing project. That story doesn’t usually end in Congress. But today, that 11-year old boy beaten by police is about to be your Representative. I can't wait to get to DC and cause problems for those maintaining the status quo.'