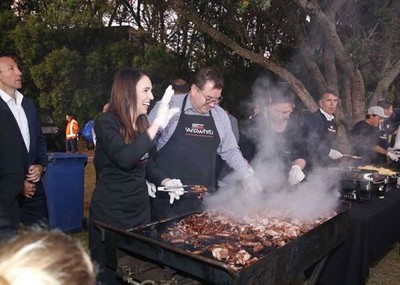 Waitangi Day is a stalking horse for a conservative brand of nationalism that only protects the political and economic status quo.

THE TELEVISION NEWS coverage of events at Waitangi have demonstrated just how TVNZ, especially, bends its news coverage - on mostly anything significant - toward the Government in power, whether its Labour or National.  Maybe that's because its  Government money that keeps TVNZ afloat and pays all those mega-salaries  but its also because TVNZ has always operated under the assumption that it is 'the voice of the nation' and it behoves them to cast the Government in the best possible light on important occasions like Waitangi Day. So, not surprisingly, Prime Minister Jacinda Ardern  received the kind of uncritical coverage that normally graces the pages of the women's magazines or appears in Labour's own election campaign commercials.

I heard one TVNZ reporter actually say that 'we all came together as a nation' at Waitangi or words to that effect. Really? Is that the country where tens of thousands of people are living in poverty while the rich just keep getting richer?  Is that the country where the food banks can barely cope with the demand? Is that the nation where homelessness is at chronic levels and there's over 20,000  people already  on the state housing waiting list? Is that 'the nation' we're talking about here?  Is that what we're 'united' about?

Unlike that privileged layer of Maori who claim to represent the interests of Maori in general, working class Maori are doing it hard.  But Waitangi Day barely acknowledges this reality and instead has become something of a stalking horse for a reactionary Maori nationalism that claims that the advancement of a relatively small number of  Maori up the corporate and political ladder is not only a sign of progress but a blow against 'colonialism'.

So someone like John Tamihere, not known for displaying any affinity for the left, thinks that the creation of Maori  council wards represents an advance for local democracy. But without upsetting the economic status quo - which would involve the kind of politics and policies that Tamihere loudly opposes - this isn't striking a blow for anti-colonialism but merely creating a new hybrid of it. Its corporate branding and its the substitution of cultural politics for real politics.

It seems to me that is not coincidental that  this conservative nationalism, which leaves the interests of the powerful undisturbed, comes at a time of growing economic deprivation and social despair. I agree with historian Barbara Fields and sociologist  Karen Fields who say that what is interpreted as anti-racism actually bolsters capitalism by placing a huge obstacle in front of working people realising their common interests in coming together to fight the bosses. A race-based politics is a  complete dead-end.

Our society, like all capitalist societies, is characterised by the defence of the rich against the poor or, as Rosa Luxemburg described it, the defence of 'those who have some property against those who have no property at all.' In December it was reported by Statistics NZ that the percentage  of people who own their own homes had fallen  to its lowest level in 70 years. Stats NZ  also commented that housing deprivation  for Maori was close to six times the rate for Europeans.  But the fundamental truth is that working class whites and working class Maori possess very little wealth or property.

This isn't going to change under the economic status quo that the Labour Government is presently maintaining and the 'nationhood' commemorated at Waitangi.  But focusing on race is a contrivance to avoid grappling with bigger economic issues that cut deep into working class communities, such as wealth redistribution.

In his book Toward Freedom: The Case Against Race Reductionism, Toure Reed observes that 'liberals use identity politics and race as a way to counter calls for redistributive polices'.

Racism is not the primary problem in New Zealand today. The pressing issue is the failure of an economic and political system that continues to disadvantage working class people today. As UK Labour MP Zarah Sultana has written, to be truly anti racist then you must also be anti-capitalist. But that part of the equation is missing from the politics of people like John Tamihere, Labour's Willie Jackson or Green co-leader Marama Davidson. What they are trying to sell as some form of 'enlightened liberalism' actually divides rather than unites us.