THE FAT CATS GET FATTER 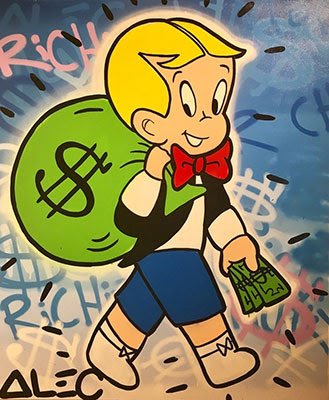 New Zealand's rich elite are laughing all the way to the bank...

THE SALVATION ARMY'S State of the Nation report painted a stark picture of a country in a midst of an economic and social crisis. That was followed by more bad news for the Government in the shape of its own child poverty statistics, even though  Prime Minister Jacinda Ardern tried to argue that progress was being made on an issue she described as one of her policy priorities during Labour's 2017 election campaign. That claim  didn't wash with the Child Poverty Action Group who described the data as 'deeply disappointing' and further evidence that 'incrementalism' wasn't working.

The Labour Government could probably have also done without the property consultancy firm Knight Frank issuing its 2021 wealth report this week. According to the report the wealth needed to join New Zealand's 'one percent' now stands at US$2.8 million. This is the fifth highest in the world  behind  Monaco, Switzerland, the United States and Singapore. This comes at the time when the queues at the food banks continue to lengthen but the Government refuses to lift benefits to help ameliorate some of the widening social distress.

But the rich are laughing all the way to the bank and giving the taxman a wide berth along the way. According to Inland Revenue and Treasury figures, New Zealand's wealthiest individuals pay just 12 percent of their total income in tax. Treasury says that 42 percent of the country's wealthy elite pay less than 10 percent in tax.

Also of interest is that Treasury estimates that the top 10 percent own 70 percent of the country's wealth while the top one percent own approximately 25 percent of all wealth.

Max  Rashbrooke, author of Inequality : A New Zealand Crisis , says that the Government's own figures have revealed  that inequality is even worse than initially thought. Tweeted Rashbrooke: