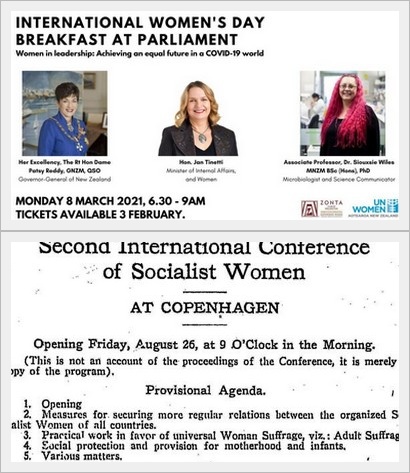 It was International Women's Day on Monday. Women, as a group, have been doing it hard during the pandemic but there was little acknowledgment of that by the corporate-sponsored UN Women Aotearoa New Zealand. Instead it chose to 'celebrate women's achievements.' Apparently its all about 'achieving an equal future in an COVID 19 world.' This comes at a time when the economic policies of the Labour Government have only deepened the level of inequality.

IT WAS INTERNATIONAL Women's Day on Monday but most people would have hardly known it. It barely rated a mention in the mainstream media. It has become the preserve of the political establishment who present a sanitised version of the event that, in Stalinisque way, has deliberately airbrushed out of the picture its political origins and much of its history.

The IWD that we know today bears no resemblance to what German socialist Clara Zetkin - and a close friend of Rosa Luxemburg - instigated. Zetkin was inspired by the activism of women workers, especially clothing workers in the United States who had gone out on strike, demanding better pay and working conditions. In 1910 at the International Women's Socialist Conference in Copenhagen she argued that a 'Women's Day' was needed to recognise such struggles. The IWD was subsequently adopted by the socialist Second International.

But the IWD has had its socialist politics squeezed out of it ever since 1975 when the United Nations adopted the day and started celebrating it. It is now a corporate sponsored event presenting a sanitised version of women's fight for equality. A event that has its origins in class struggle is now the preserve of capitalist politicians, state-sponsored dinners, social media campaigns and talk about 'female entrepreneurship' and getting more women into corporate boardrooms.  This is the kind of event that centrist politicians like Jacinda Ardern, Marama Davidson and Julie Ann Genter are comfortable with.

So on the website of UN Women Aotearoa New Zealand IWD  any mention of the day's socialist origins is duly omitted. Instead we read:

'In 1975 the UN recognised it as a day dedicated to the rights of women, but its beginnings were long before that. It was first celebrated in Austria, Denmark, Germany and Switzerland in 1911, and in some countries was soon established as a public holiday.'

How ironic that an UN-sponsored event that claims it wants 'to celebrate women's achievements' omits to mention the achievement of a woman like Clara  Zetkin to get the IWD adopted by the Second International in the first place. Of course her crime was that she was a revolutionary socialist who knocked around with other revolutionary women like Rosa Luxemburg.

This year the theme of the UN's IWD  was 'Women in Leadership: Achieving an Equal Future in a COVID-9 world'. In New Zealand that translated into the Governor General Patsy Reddy, the Minister of Internal Affairs and Women Jan Tinetti and microbiologist Dr Siouxsie Wiles speaking at a parliamentary breakfast (with tickets at $60 a head).

The theme was  apparently all about  celebrating 'the tremendous  efforts by women  and girls round the world shaping a more equal future and recovery from the COVID-19 pandemic.'

In a single PR-driven and government-friendly gesture, UN Women Aotearoa New Zealand  failed to even acknowledge the severe impact that the coronavirus has had on many women's lives. It might of highlighted the high profile work of someone like Siouxsie Wiles, but most women have been doing it hard during this pandemic. Last year, for example, the June financial quarter saw 11,000 New Zealanders lose their jobs. Approximately 10,000 were women. This was simply because more women are in service-related jobs  that COVID 19 has impacted the most.

The reality is that the economic welfare, safety and mental health of a lot of women have  all been under pressure during the pandemic. But while this Labour Government professes to support the 'aims' of IWD, it has declined to ameliorate some of that pressure by increasing benefit levels. In stark contrast it has funnelled billions of dollars to the business sector, in an unprecedented transfer of wealth to the already wealthy.

While Labour and Green politicians talk about women's rights and 'feminism', women  have been fundamentally let down by the Labour Government and the Green Party. They don't need the empty platitudes of today's IWD and trotted out by the Minister of Internal Affairs and Women at $60 per head breakfasts, they need real solutions. But, of course, that would mean directly opposing the neoliberal policies that have prevailed for the past thirty years and which this Labour Government continues to protect and maintain. What we do need is more of the politics of the originator of IWD, Clara Zetkin, and far less of the centrist politics of Prime Minister Jacinda Ardern.