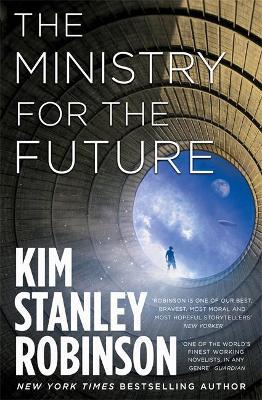 Kim Stanley Robinson's new novel says that solving the climate crisis is incompatible with a defence of our present economic system.

KIM STANLEY ROBINSON is one of today's foremost science fiction writers. He is also a member of the Democratic Socialists of America and describes himself as an 'American leftist'. So his vision of the future is entirely different from that of our own corporate-friendly Minister for Climate Change. While James Shaw continues to cling to his fantasy of an environmentally-friendly capitalism - even when many of the young people who were protesting  on Friday were demanding 'system change not climate change' - Robinson's new novel  is all about how we can transition away from capitalism.

Robinson is the author of some twenty books but he's probably best know for his Red Mars trilogy where the colonists on Mars attempt to break away from capitalist Earth and forge a new society that looks remarkably socialist. There is even a revolution on the way to getting there.

The Ministry of the Future pulls back from such a conception of change and does not speculate on such an abrupt break with the status quo and instead  talks of what Robinson describes 'a stepwise progression from what we've got now to a better system.' But this is  still about 'system change, not climate change'.

Robinson rejects as 'outdated thinking' any solution to the climate crisis that simply proposes tinkering with the present system. While our own Green Party continues to reject the Green New Deal because - essentially -  it would undermine corporate interests, The Ministry for The Future embraces the GND as part of building a bridge to a new society and a better future for everyone.

Kim Stanley Robinson's books are about ideas -  big ideas - and he uses the novel form to express those ideas to a mass audience. Sometimes his novels can, at times, be a little bit  didactic but you still can't hlep but be impressed by the control he has over his material that it maintains a coherency of narrative.

In a world where dystopic fiction seems to dominate - in books, television  and film - good utopian fiction is a rare beast. Robinson himself says that the utopian literary tradition has  probably only thrown up about twenty-five good books in the past four hundred years. So Robinson's work, at a time when we need such literary  visions of a better world, goes a little way to redressing the balance.

Robinson himself is wary of the term 'utopian' because it can suggests a better world is somehow out of reach - pie in the sky stuff - but The Ministry of the Future  reminds us that, despite the crisis we are facing, the shape of the future still remains in our hands. But, at the same time, it will require a recognition that solving the climate crisis is incompatible with a defence of our present political economy. Kim Stanley Robinson no doubt agrees with  fellow writer, the late Ursula Le Guinn, who observed: 'We live in capitalism. Its power seems inescapable. So did the divine right of kings. Any human power can be resisted and changed by human beings. Resistance and change often begin in art, and very often in our art, the art of words'.