THE DICTATORSHIP OF VIRTUE AND HOW TO END IT 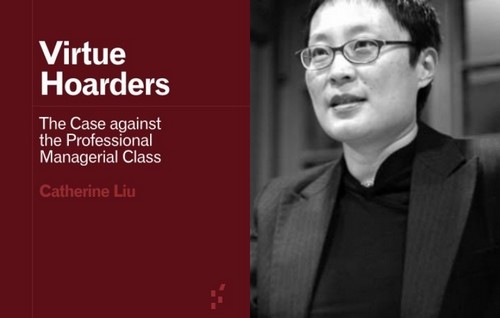 Catherine Liu's new book attacks a liberal class that has set itself up as as cultural and moral arbiters and that prioritises identity politics while ignoring the deepening economic plight of the working class.

IN A RECENT COLUMN commentator Chris Trotter makes the observation that, almost without any real debate, race and racism have becoming the defining issues of New Zealand mainstream politics. As part of his argument he points to the research project Whatakita which he concludes 'reports a racism so pervasive that it is difficult to avoid the conclusion  that the maintenance of racial inequality is basic to the preservation of Pakeha identity.' In other columns Trotter has written about how the pervasive influence of identity politics has helped to define a progressive politics where class may not speak its name.

Such views are likely to see Trotter dismissed by his political opponents as a 'class reductionist' - as opposed to being a 'race reductionist'. However he doesn't help his own case by appearing to champion a class-based politics but, at the same time, still continuing to pour his familiar scorn on socialist politics. If not identity politics, then what? His continued support for Labour starkly highlights that he, and others like him, have little to offer in the way of a political alternative. Such is the political bankruptcy of liberalism and social democratic politics.

A far more expansive and enlightening argument comes from American academic Catherine Liu. Professor in Visual Studies and Film and Media Studies at the University of California, her new book Virtue Hoarders : The Case Against the Professional Managerial Class  has been causing waves in left wing circles overseas and is making Liu something of a cause celebre within the American left.

Those waves have yet to lap on New Zealand shores but any attention this book receives may well just come from blogs like this. Mainstream media organisations like Stuff or RNZ  may well be 'sensitive' to the views of someone like Catherine Liu to the point they'd rather just ignore them. Her book is, after all, a sharp critique of the agenda that organisations like Stuff and RNZ are aggressively promoting.

Virtue Hoarders is a condemnation of the positioning of the elite liberal class as cultural and moral vanguards, who prioritise identity politics while ignoring the deepening economic plight of the working class.

Liu says that it is the views of the professional managerial  class (PMC) that dominate 'political organisations, publishing, media, private foundations, thinks tanks, and the university'. This, she says, is a class 'convinced of its own unassailable position as comprising the most advanced people the earth as ever seen that assumes that it has the ..ability to do ordinary things in extraordinary, fundamentally superior and more virtuous ways'.

The insistence of PMC elites to assume they have a right to tell the rest of us how to live has resulted in an evitable backlash against 'wokeness'. Liu's contention is that, at the heart of the PMC, lies a secret contempt for ordinary people. She also suggests that it has only been the right that have heard the rage of ordinary people but have weaponised that feeling for reactionary purposes.

Somewhere in the 1970s Barbara and John Ehrenreich first coined the term 'professional- managerial class' to define a class whose purpose was not only the reproduction of capitalist  culture and capitalist class relations but could also act as a bulwark in defence of working class interests. In effect the PMC stood as the great moderating influence that helped to maintain political stability.

Indeed the PMC has always managed to come up with an explanation for our economic problems that ensures blame never falls on capitalism itself. It leads to situation where capitalist politicians like Willie Jackson and  Marama Davidson, both anti-socialist, claim that it is racism not our economic system that is preventing the majority of Maori from making economic progress. It leads to a situation where a media organisation like Stuff apologises for its historic coverage of Maori issues and concerns but continues to leave unexamined and, indeed, celebrates an economic system that continues to act against the interests of working class Maori. It leads to a situation where media organisations like TVNZ and RNZ window dress their news reports with te reo, but continue to do next to nothing to challenge a capitalist status quo that continues to disadvantage working class Maori and the working class as a whole.

Liu freely concedes that she is a member of the PMC and is writing for a readership of that class. But she says the book is intended as 'a guide to PMC values' in order that they can be liquidated. She says that as long as members of her class continue to accept their class identity they will continue to be reduced to a 'false consciousness' and will continue to be defenders of neoliberalism and capitalism while offering a fake progressive politics which is 'shameless about hoarding all forms of secularised virtue: whenever it addresses a political and economic crisis produced by capitalism itself, the PMC reworks political struggles for policy change and redistribution into individual passion plays, focusing its efforts on individual acts of 'giving back' or reified forms of self-transformation'.  Prime Minister Jacinda Ardern's many appeals for 'kindness' can be inserted around about here.

We now live in a political environment where the PMC prefers to fight culture wars against the working class while currying favour with the capitalist class. Liu writes that if 'Marx theorised that class struggle was the engine of historical change and the political agent of it the proletariat, the newest incarnation of the PMC tries to make history by undermining working class power and ignoring working class interests'.

Liberalism is a dead end and Catherine Liu says that her goal is 'a return to socialist politics and policies' It is time, she says, for a working class politics that, among other things, can bring down an identity politics that 'has become just another vehicle for PMC virtue signalling.'  Bring it on.