THERE IS NO MARKET SOLUTION TO THE CLIMATE CRISIS 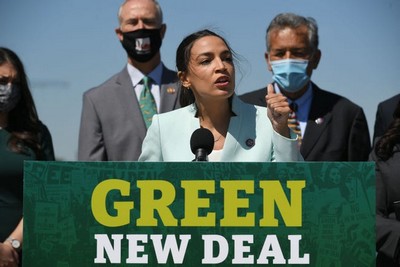 Jacinda Ardern thinks the world should be following New Zealand's example on climate change. That would be a disaster. What the world really needs is a Green New Deal.

ONLY A FEW DAYS after her own Climate Change Minister had admitted that the Government had failed to meet the public expectations that followed Jacinda Ardern's 2017 election campaign statement that climate change was 'the nuclear free moment of her generation', Ardern was advising other countries to follow New Zealand's lead on the issue. She told US President Joe Biden and the 38 other government leaders at the virtual leaders Summit on Climate Change that she wanted other countries 'to follow New Zealand's lead and do the following four things: price carbon, make climate-related financial disclosures mandatory, end fossil fuel subsidies, and finance adaptation. Now is the time to act.'

Given the scale of the crisis though, the world needs to be a whole lot more ambitious than what Jacinda Ardern is proposing.

Greenpeace executive director and former Green MP Russel Norman commented; 'Ardern is encouraging other countries to follow New Zealand's lead on climate. Quite frankly, that'd be a disaster considering our Government is too timid to regulate our biggest climate polluter.'

Norman is right to criticise the Ardern Government's failure to police the agricultural industry but Norman is as loyal to 'the market' as the Labour Government and its Green Party ally. His argument with Jacinda Ardern is about policy and not about the Government's market-based approach. Given that Norman represents a high profile organisation like Greenpeace, this is very disappointing.

While some might of lauded President Joe Biden's declaration that the United States will supposedly halve greenhouse gas emissions from the 2005 levels by the end of the decade, the United States is - like New Zealand - still operating under the delusion that an environmentally-friendly capitalism can be crafted through the right mix of policies. We're expected to believe that the political representatives of the very economic system that is chewing up the planet can be relied on to solve the crisis. They can't.

There are no market-based solutions to the climate crisis and much of the scientific community, which has no political skin in the game, has become increasingly forceful in pointing that out. So instead of Jacinda Ardern's 'realistic solutions' to the climate crisis, based on a free market fantasy, how about we grapple with what's really real: the need, for the sake of the planet, to dismantle the system that is propelling the planet over the cliff.

Three days before the climate summit AOC and her supporters deliberately relaunched the Green New Deal for the United States. This is a plan that has also gained popularity in other parts of the world and adopted by other political parties, although not by New Zealand's market-friendly Green Party. It proposes a comprehensive reorganisation of the American economy. Unlike market politicians like Ardern, the GND does not accept that capital can solve the climate crisis and proposes putting people and the planet first before corporate interests. AOC said this week: 'We refuse to leave any community behind. And, those who have been left behind come first. The Green New Deal isn't just a resolution. It is a revolution.'

We need that revolution also in New Zealand.