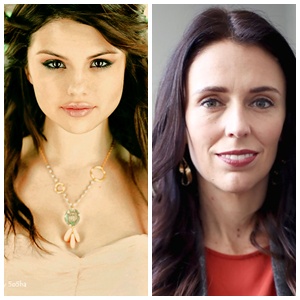 Prime Minister Jacinda Ardern's defensive response to comments made by US singer Selena Gomez has exposed a Prime Minister and a Director of Health who won't stand up to the greed of the pharmaceutical industry and won't support developing countries  producing their own Covid-19 vaccines.

MUCH OF Prime Minister Jacinda Ardern's reputation as a so-called 'progressive' politician is leveraged on her international status and she has always been quick to react when that international status has been questioned. So she has been swift to dump on US pop singer Selena Gomez - who has a massive international following - after the singer suggested that the New Zealand Government was not doing all it could to help poorer countries to fight the coronavirus .

Via Twitter, Gomez has called on political leaders like Jacinda Ardern and French president Emmanuel Macron to 'ensure that everyone can access the vaccine'. The Prime Minister's office has responded that the Government is 'committed to equitable access to safe and effective vaccines globally'. As evidence of this commitment it has outlined how it has contributed $17 million to funding vaccine distribution in 93 poor countries as well as donating free vaccines to countries in the South Pacific.

Two weeks ago 170 Nobel laureates and former heads of states sent an open letter to  US President Joe Biden urging him to back a waiver of intellectual property rights.

The signatories said that were 'gravely concerned by the very slow progress in scaling up global Covid-19 vaccine access and inoculation in low and middle incomes countries' and that 'we will not end today's global pandemic until rich countries - most especially the United States - stop blocking the ability of countries around the world to mass produce safe and effective vaccines'.

Its estimated that under present production and distribution arrangements, nine out of ten people will go without a vaccine this year. And, at the present pace, many countries will be waiting until 2024  to achieve  mass Covid-19 immunization.

In January an open letter to Jacinda Ardern, signed by 42 organisations, called on her to support the campaign to have patent rules suspended. That letter was signed by organisations such as Oxfam, Amnesty International, Doctors Without Borders NZ and several unions affiliated to the Labour Party.

But Jacinda Ardern has declined to back the production of a people's vaccine. Instead she has sided with her Director of Health, Ashley Bloomfield, who claims that it is the 'logistics of production' that is slowing the process of vaccine distribution to developing countries and not the maintenance of  intellectual property rights.

This sounds remarkably like the argument of Bill Gates, one of the world's richest men. According to Gates it is also not intellectual property rights that are holding back the global vaccine rollout but the production process : 'You know, you've got to do the trial on these things. Every manufacturing process need to be looked at in a very careful way'.

Nick Dearden who heads Global Justice, one of the lead organisations campaigning for a people's vaccine responded: 'Who appointed this billionaire head of global health? Oh yeah, he did...The poverty of vision from Gates and other 'leaders' has been astounding. Smallpox, polio, both had joined up responses that shared knowledge and technology across the world. We're happy to let the pharmaceutical market sort out the biggest crisis of our lifetimes. Totally on autopilot.'

US Congressman Bernie Sanders has said that the suspension of coronavirus-related patent protections is a matter of 'common sense and morality':

'Ending this pandemic requires collaboration, solidarity, and empathy. It requires a different mindset..the mindset that tells the pharmaceutical industry that saving perhaps millions of lives is more important than protecting their already excessive profits.'

But Jacinda Ardern, backed by her Director of Health, have decided to support Bill Gates and others like him  - and not stand up to the greed of the pharmaceutical industry.  It is a shabby and disgraceful decision although that hasn't stopped Ardern's uncritical supporters flock to social media to defend her and claim that 'Gomez doesn't know what she's talking about'.