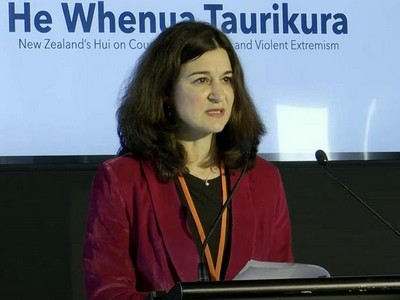 Despite being a consistent and vocal supporter of the state terrorism committed by the Israeli regime, Juliet Moses was invited to speak at a conference focused on 'countering terrorism.'

I'M NOT SURPRISED that members of the Muslim community walked out on a panel discussion on the causes of terrorism after Juliet Moses of the New Zealand Jewish Council waded in with her hobnailed boots on.

Moses, a confirmed Zionist, used He Whenua Taurikura, a conference on 'countering terrorism and violent extremism"  as an opportunity to launch yet another one of her familiar attacks on supporters of the Palestinian people. This time she repeated her claim that a 2018 Auckland rally in support of the Palestinian cause was both pro- Hezbollah and pro-Hamas. She had only just described both military organisations as terrorist groups, a claim  that was met with shouts of 'Free Palestine!' from within the audience.

Azad Khan of Foundation Against Islamophobia and Racism said his group was 'not going to sit there with dignity and listen to her say that.'

Canterbury political science lecturer Bronwyn Hayward tweeted that she had also walked out in protest and suggested that the panel discussion had been badly organised from the off. Indeed. Questions need to be answered about why Moses was invited in the first place since it was almost inevitable she would be a divisive influence.

Moses is an uncritical supporter of the Israeli regime and its continued oppression of the Palestinian people. She consistently tries to portray support for the Palestinian cause as either being linked to 'terrorism' or driven by 'anti-Semitism'. These are also familiar strategies employed overseas and, in many cases, such campaigns are funded by the Israeli Government.

In 2017 Moses attacked singer Lorde for cancelling a concert in Tel Aviv in solidarity with the Palestinian people. She claimed that Lorde had been 'duped' by the Boycott Disinvestment and Sanctions movement - which the Israeli Government has long been trying to suppress.

In recent times she and the New Zealand Jewish Council praised Donald Trump's decision to recognise Jerusalem as Israel's capital, ignoring the fierce opposition of the Muslim world.

As I wrote in 2019 Juliet Moses 'has never shown the slightest concern for the plight for the Palestinian people, suffering under the iron heel of the Israeli regime.'

Moses supported the recent military onslaught against Gaza which left some 67 people dead, including  17 children. There are substantial and compelling reasons for focusing on the state terrorism being carried out by Israel. The people of Gaza, trapped in the world's largest open air prison, continue to be the victims of violent oppression at the hands of the Israeli Government  and little wonder that the International Criminal Court have launched an investigation against Israel for war crimes committed in Gaza.