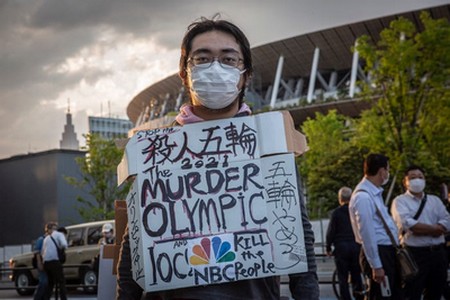 New Zealand athletes have won some medals at the Olympics. Oh, and Tokyo continues to suffer record numbers of coronavirus cases..

THE NATIONALISTIC tubthumping that surrounds any Olympic Games is depressingly predictable and the New Zealand media have pulled out all the stops to be as mindnumbingly chauvinistic as ever.  But its even more offensive this time round because it represents one gigantic slap in the face for the Japanese people who did not want these Games to take place. Just two months ago an extraordinary  80 percent of the Japanese population wanted the Olympic Games to be cancelled  - and the figure has remained high ever since. The International Olympic Committee's fond hope that the Japanese people would embrace the games once they started has not eventuated.

The Japanese people have rightly feared that the Olympics would become a 'superspreader' event. On Thursday Tokyo officials said  that the city had recorded a record high of coronavirus cases for a third straight day. Japan's health ministry reported 3,856 new cases, nearly 700 more than were reported on Wednesday. Tokyo's governor has warned it could climb to as high as 4,500 cases per day.

These disturbing figures have not dampened our Minister of Sport's enthusiasm for the Games however. On Friday Grant Robertson jumped on Twitter to bask in the reflected 'glory' of New Zealand winning some rowing medals. Oh, and maybe score political brownie points for himself in the process.

That the wishes of the Japanese people have been trampled over by the IOC and the local organisers has been of little concern for our politicians and the corporate media alike. Apparently issues of political rights and cultural sensitivity only apply domestically. We can conveniently ignore them when they apply to another country 9,000 kilometres away.

The Japanese Government denies there is any direct link between the Olympic Games and the surge in coronavirus cases. But, in holding this event, a confusingly mixed message has been sent to the Japanese people about the need to limit activities - especially since only about twenty-five percent of the Japanese population is vaccinated against the virus.

Would New Zealand hold, say, the Commonwealth Games in Auckland if the city was struggling with an upsurge of the virus? I don't think so.

Two months ago the British Medical Journal  said that holding the games was contradictory to 'a commitment to global health and human security'.

But, for the IOC, money talks louder than any commitment to global health. Broadcaster money accounts for 73 percent of IOC revenues, with an additional 18 percent coming from its corporate partners. Some of that money will be coming from New Zealand via media organisations like Television New Zealand.

We don't need any of this. Let's make Greece the permanent home of the Olympics and remove the advertising, product placement, professionalism and national flags. Let's create a proletarian Olympic Games.